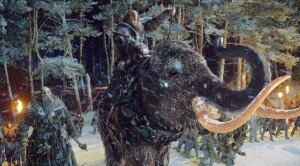 After last week’s epic ending, this week’s episode of “Game of Thrones” completely changed gears and moved north to focus solely on the battle at the Wall. This battle has been gearing up for nearly two seasons and did not disappoint. The episode felt like a movie, and is probably the most visually impressive episode in “Game of Thrones” thus far. Let’s get right into the recap.

Game of Thrones Season 4 Episode 8 Review: “The Mountain and the Viper”

The episode begins with Jon and Sam keeping watch on top of the Wall. Sam is still upset with himself for sending Gilly to Mole’s Town and is worried she and her baby were murdered when Tormund Giantsbane’s band of Wildlings attacked the town; unbeknownst to Sam, Ygritte had an opportunity to kill Gilly and her baby in the attack, but was merciful and let them live. Sam asks Jon what it was like for Jon to be with Ygritte and to love someone. Jon tries to tell Sam but he cannot explain the feelings he has for Yygritte. Seeing Sam is worried, Jon tells him to get some rest and he will take over the watch. As Sam leaves Jon to go below, an owl watches them.

Somewhere not far from Castle Black, the warg controlling the owl sits with Tormund and Ygritte in their camp with their small group of Wildlings. The Wildlings are waiting for Mance’s signal and are growing impatient. Ygritte is making arrows while the men discuss their desire to kill the Night’s Watch. Ygritte tells Styr Jon is hers to kill. As the camp discusses their plans, Gilly and her baby sneak past their camp as she flees Mole Town to get to Castle Black.

As Sam leaves the library, he hears Gilly crying outside the gate. Pip does not want to open the gate and let her in, but Sam curses at Pip to let Gilly in and Pip listens. As Sam tells Gilly he will never leave her again, the warning horn blows on top of the Wall and Sam realizes the battle is about to begin.

On top of the Wall, Jon looks over and sees a huge fire set by Mance Rayder’s men. Jon and the other men prepare the Wall’s defenses while Ser Alliser Throne admits to Jon they should have sealed the gate when they had the chance.

Down in Castle Black, Sam hides Gilly inside, when she tells Sam she wants him to stay with her. He kisses her and tells her he has to keep his vows and protect the Wall. She makes him promise he won’t die.

South of Castle Black, Ygritte scouts out the castle’s defenses and reports back to Tormund the number of men she sees. Tormund decides to attack Castle Black while the Wildlings north of the Wall distract much of the Night’s Watch.

On top of the Wall, Jon and the other men watch Mance’s army in amazement. They see giants and mammoths in the army, and Jon knows the gate will not stop the large beasts.

As the men stare in awe, Tormund’s men attack Castle Black below. Ser Allister decides to go help the men below and put Ser Janos Slynt in charge of the forces on top of the Wall. Ser Janos is completely stunned by Mance’s army and cannot make any orders. He is in disbelief that there are real giants and mammoths. Gren tells Ser Janos that Ser Allister needs his help below, and Ser Janos gladly leaves; Jon takes control of the forces on top of the Wall.

Down at Castle Black, the Night’s Watch is being completely obliterated. The Wildlings are too strong and fast compared to the inexperienced men in the Night’s Watch. Sam and Pip find a strategic position to hide and shoot arrows at the Wildlings. After Pip kills a Wildling, he loads another arrow and as he gets up to shoot, Ygritte shoots him with an arrow through the neck. Sam tries to ease Pip’s pain as he dies. Ser Janos flees the fight and finds Gilly hiding.

North of the Wall, a giant manages to open the gate by himself. Jon sends Grenn and five others to defend the gate from the other side. Sam comes up on the Wall to tell Jon Ser Allister is hurt and Ser Janos is no where to be seen, so Jon decides to give Edd control of the forces on top of the Wall and leaves to go help the men in the castle. As Jon and Sam enter the Castle, Jon tells Sam to let Ghost out so Ghost can help them fight.

As Ghost tears men apart, Jon fights Styr. The two men beat each other down, and Styr nearly kills Jon when Jon manages to find a hammer and hit Styr in the head with it, killing him instantly. Ygritte sees Jon fighting Styr and rushes to the fight. When Jon gets up after killing Styr, he sees Ygritte with an arrow pointing right at him. He smiles as he sees her, and as she hesitates to kill him she gets shot with an arrow. Jon rushes to her side and she tells him they should never have left the cave they were in when they made love. As she dies, Ygritte tells Jon he knows nothing.

On top of the Wall, Edd releases a huge anchored chain that smashes the men climbing the Wall and releases huge chunks of ice from the Wall down below, killing anyone else trying to climb up. Mance’s army retreats back North of the Wall, and the Night’s Watch cheer from above. Edd tells them to stay quiet, as he knows the battle is not over.

Somehow, the men in Castle Black manage to get the upper hand in the fight and corner Tormund. Jon has him chained up and thrown into the dungeons. While the Night’s Watch celebrate their victory, Jon knows Mance will return the following evening and their defenses will not hold much longer. The Night’s Watch is simply outnumbered. With nothing else to do and their leadership missing, Jon decides he will go north of the Wall and find Mance Rayder and kill Mance himself. Sam does not think this is a smart idea, but Jon points out they have no other options.

As Jon and Sam walk through the gate, they find Grenn and his men dead from fighting off the giant who was trying to get through the gate; the giant is dead as well. Jon says goodbye to Sam and leaves his sword with Sam. Sam opens the gate and Jon walks by himself into Wildling territory.

And with that cliffhanger, the episode ends. We will have to wait until next week to see what happens to Jon and the rest of the Night’s Watch. If the writers follow the books, it will definitely be an exciting ending!

Sadly, we have to say goodbye to Ygritte, Pip, and Grenn. Ygritte’s death was exactly how I imagined it would be when I read the books, and Rose Leslie did a fantastic job, as did Kit Harrington. Jon is really coming into his own as a leader and showed what an example he is for the other men in the Night’s Watch. I am glad Ser Allister did not die as he did redeem himself a bit in this episode. I will be curious to see what will happen between the two men in the future. I am also happy Ghost finally got some well deserved action! As I have said many times in the past, the lack of direwolves in this show is incredibly irritating as they play a large role in the books, especially Ghost.

While the pacing of this episode was a bit off, the effects were amazing and the acting was pretty fantastic. I hope next week’s season finale will keep the pace going and leave us a lot to look forward to.

Jon Snow Knows Nothing in ‘Game of Thrones’ Animated Shorts

Go Inside the Stunts of ‘Game of Thrones’ Season 5