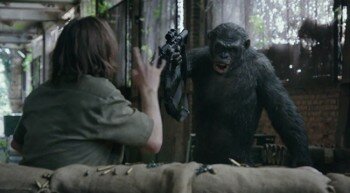 The future of the human race looks bleak and war-torn. While Caesar’s nation of Apes continues to flourish from the experimental enhancing drug that gave him super intelligence, the human survivors of the same drug are falling further into disarray. Paranoia and mistrust are rampant as Caesar’s and Malcom’s desperate efforts to maintain peace and foster trust are being crushed by both sides giving into fear.

The final trailer for Dawn of the Planet of the Apes starts out with expansions on scenes that are familiar to us by now from Dawn’s prerelease media. The uneasy truce is palpable and the connections Caesar and Malcolm make are heartfelt. The new scenes make it perfectly clear just how futile their pushes for coexistence will ultimately be. We see Koba, one of the most vindictive of the Apes, tricking two human campers into letting their guard down with playful hijinks, then snatching their assault rifle and mowing down both of them, his fangs bared in a shockingly evil leer.

Dawn of the Planet of the Apes Clip Shows Tense Encounter

The music gets quiet, the sounds are muffled and then shot after shot gives us a pretty good glimpse of the war we are in store for. Hordes of Apes charging a human line on horseback, construction yards collapsing into rubble, humans and apes being scattered by explosions, and finally one ape riding on horse and dual wielding two light machine guns. Chilling, epic and gut wrenching all at once.

Different versions of the trailer can be seen in the various postings of the video with different language subtitles and on the DawnofApes.com website itself, but between all of them, the outlook is clear. The Planet of the Apes will dawn with war.

I could not be more psyched to see this movie! Audiences everywhere are in for one hell of a ride when Dawn of the Planet of the Apes debuts July 11th. AND DO NOT MISS this spectacular trailer below, with the version taken from the DawnofApes site.