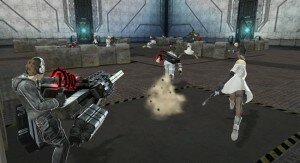 Japan Studio Producer, Junichi Yoshizawa recently revealed that, “Freedom Wars is a title I created to realize a dream of mine. My vision was to develop a PS Vita game that took advantage of the handheld system’s unique features, enabling gamers to come together via ad-hoc and Wi-Fi to overcome terrifying enemies. PlayStation has a storied legacy of creating innovative experiences and our collective goal was to create a Vita game that brought gamers together in a socially connected, location-based, co-op experience.”

The new trailer shows off the game’s 1984 inspired narrative as the player is forced to fight in a war to reduce their 1 million year prison sentence for the crime of being born. Freedom Wars is currently scheduled to release later this year in North America and Europe–perhaps following its August release in Southeast Asia and its Q3 2014 release in South Korea?”

The Ratchet and Clank Collection Hits the PS Vita Tomorrow