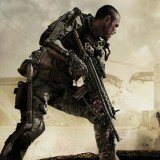 Back in 2007, Call of Duty 4: Modern Warfare burst onto the scene and redefined the first person shooter. It’s hard to remember now, but before then Call of Duty wasn’t nearly as big, and was known predominantly for being a World War II shooter of marginal success. The latest developer to take the reins of the Call of Duty franchise, Sledgehammer Games, yearns to recapture that breakout success with their installment, Call of Duty: Advanced Warfare, according to an interview with co-founder Glen Schofield in Official Xbox Magazine.

“We looked back at the history of Call of Duty, and I don’t know if you remember when Modern Warfare came out, for those of us in the industry who weren’t at Activision at the time, it really blew us away. To us it really ushered in a new era of Call of Duty, it puts you in the shoes of a Tier 1 soldier, in the Middle East—it was realistic, the sound, the audio, the look of it was just unbelievable. We wanted to try and capture that same feeling in this game.” Schofield went on to say.

These comments put the game under significant pressure, as Modern Warfare is often cited as the game’s finest hour, but fellow Sledgehammer co-founder also has high expectations, “We’re really trying to usher in something pretty special here.” He went on to say. Call of Duty: Advanced Warfare is scheduled to release on November 4th on Xbox One, Playstation 4, Xbox 360, Playstation 3, and PC.