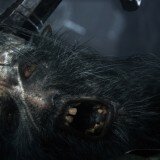 E3 2014: Death Comes For You in Bloodborne Gameplay Reveal

From the developers behind the critically acclaimed Souls franchise, From Software has released gameplay footage of their latest project, Bloodborne for the Playstation 4. Proving to be as much familiar as it is beautiful and intimidating, it definitely gives off the gothic vibe From Software is known for, and the iconic gameplay style that is as immersive and challenging as it is unforgiving.

Led by Hidetaka Miyazaki as the director, we can expect this game to be nothing short of more of the same as with his previous titles, which depending on your preference may be a good or a bad thing. Improvements however come in the game’s presentation, bringing forth intricately detailed, if not morbid, enemy design with a gothic and mystifying London-esque cityscape to venture forth into to explore.

The entire package seems to be From Software’s take on the iconic visual styles akin to what comes to mind when thinking of Dracula or Jack the Ripper, with cobblestone streets bathed in moonlight, twisted brick and iron alleyways leading to shadows where only the brave, or crazy, dare to tread.

Bloodborne’s release date is expected somewhere in 2015, and will be released exclusively on the Playstation 4. Check out the gameplay trailer below.