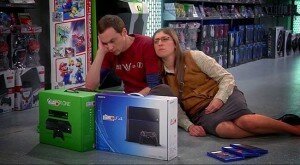 After my monumental disappointment that was How I Met Your Mother’s series finale, it was a pleasant change of pace to see something hit a lot of high notes. “The Indecision Amalgamation” doesn’t take any major leaps forward in terms of story development, but instead we were treated to some super funny character moments, some of which were sweet, others were hilarious.

The biggest of these story lines for me this week was definitely Raj’s, who instead of acting like a complete tool bag, ends up being a normal person when he runs into Emily (the girl he met online a few episodes back and had Amy message her instead). She is back, and this time Raj didn’t act like a complete dick. In fact, he was downright charming this time around. It was great seeing Raj take a step forward instead of remaining on this plateau the writers have kept him at. To make things even better for Raj, Lucy wants to meet him again as well, and now he has two women instead of his normal zero. Decisions. Decisions.

Penny also had an interesting choice to make as the part for Serial Apist 2 comes back around. Once again, she struggles with the decision of whether it’s the right move for her career. With the help of regular guest star Will Wheaton we get some humorous moments of reflection from both Wheaton and Penny. Leonard isn’t given a whole lot to do other than try to help Penny. It seems like lately Penny and Leonard have been at something of a stalemate. Their stories aren’t bad but they are never extraordinary either and I think something new needs to happen between them soon, especially with the prospect of three more seasons to fill.

Perhaps the funniest part of the episode, and this will certainly hit a lot of gamers close to home, was Sheldon’s struggle to pick between the Xbox One and The PS4. It was probably just a matter of time until the show decided to tackle the new generation of consoles, and an episode all about decisions was the perfect place to set up that story. I won’t give away anything specific, but this plot had some of my favorite lines all season and was a very in-character moment for Sheldon. Likewise, Bernadette had to deal with a choice she made in regards to a sick coworker and a “get well” card she sent. This was a fairly small chunk of the episode but still provided some solid opportunities for laughter.

We only have a handful of episodes left in the season, and I sense that, like with most Big Bang Theory finales, something major might happen. I’m not totally sure what it will be yet, but I have some ideas floating around my head. My hope is that this season finishes out as strong as past seasons. Knowing that the show won’t be ending anytime soon gives me both excitement and apprehension. Excitement because I love this show, but apprehensive because any show getting this far into their lifespan is bound to hit some lulls. I assume the producers of the show have some sort of plan for the next few seasons and I can’t wait to see what’s in store.

The Big Bang Theory S7/E21 Review: “The Anything Can Happen Recurrence”
B-

The Big Bang Theory S7/E20 Review: “The Relationship Diremption”
B