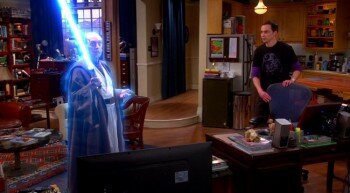 If there is one word I rarely, if ever, use to describe The Big Bang Theory, it’s sad. Yet that is the word that comes instantly to mind throughout much of “The Proton Transmogrification”. Death has never been a major topic on the show before, so with the passing of Dr. Jeffries a.k.a Professor Proton, we got an opportunity to witness how the characters deal with grief.

Unfortunately for the gang, Professor Proton’s funeral occurs on Star Wars Day, where the boys planned on watching all six films in an epic marathon. This prompts Penny and Leonard to attend the funeral for their fallen friend and gives them a chance to reflect on past mistakes and regrets. Specifically, when Leonard rejected Penny’s marriage proposal. This sub plot has come up multiple times this season and I think it’s pretty safe to assume that at some point the couple will end up engaged. It would be nice as their relationship has been in a sort of standstill for a long time now, and even though it’s not bad, it’s not particularly engaging either.

Sheldon chooses to stay behind and assures everyone that he is fine and that the marathon should continue as planned. Of course, Sheldon isn’t actually fine, as Professor Proton made a huge impact on Sheldon’s desire to be a scientist. In a particularly nuanced scene, Sheldon projects his anger onto Raj and Howard who also stayed to watch the films (not being as close with Proton). Sheldon has one of his breakdowns and ends up dreaming of Professor Proton dressed as a Jedi Master.

This scene was a particular favorite of mine from this season. I don’t want to spoil it exactly, but it mixes well-placed humor with some tender human emotions as Sheldon confesses that the only other times he’s had to deal with losing a loved one were when his Grandfather and Father passed away. The advice Jeffries ends up giving Sheldon may be a little obvious, but I still thoroughly enjoyed seeing Sheldon face up to his emotions head on instead of suppressing them the way he normally does. One of the major plots of this show from the very start was teaching Sheldon how to be a human being and these sentimental moments offer a reminder of just how far Sheldon has come over the show’s seven years.

Even though “The Proton Transmogrification” offered up some good laughs here and there, this episode was primarily an emotional one. It wasn’t sappy or overly-sentimentalized, which worked in it’s favor. Even though not everything worked well (some comedy undercut the emotions), the episode as a whole was an interesting change of pace for the show’s course. We only have two episodes left this season, and I am left to wonder what big event the writers have in store for the season finale. I’m betting we will get a clue, if not a reveal next week. This was a great, albeit different kind of episode, but something about it truly got to me, and that hasn’t happened on this show for a while.

The Big Bang Theory S7/E21 Review: “The Anything Can Happen Recurrence”
B-

The Big Bang Theory S7/E20 Review: “The Relationship Diremption”
B+