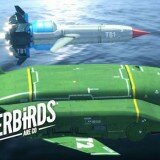 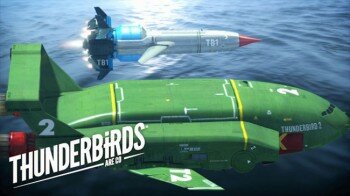 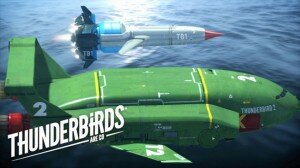 The first full-length trailer has arrived for the upcoming Thunderbirds Are Go! television series. Check it out below!

Thunderbirds Are Go!, which is a remake of the 1960s Thunderbirds British TV series, follows the adventures of International Rescue, a top secret organization that helps those in danger using advanced equipment based off Tracy Island. The revival is expected to bring back many favorite characters from the original series.

The voice cast features Rasmus Hardiker as Scott and Alan Tracy, David Menkin as Virgil Tracy, Thomas Brodie-Sangster as Gordon and John Tracy, Kayvan Novak as Brains, Rosamund Pike as Lady Penelope Creighton-Ward, David Graham as Aloysius Parker, Sandra Dickinson as Grandma Tracy, Andres Williams as The Hood, Angel Coulby as Kayo, and Adjoa Andoh as Colonel Casey. The series is produced by ITV Studios in partnership with special effects studio, Weta Workshop (The Lord of the Rings, The Hobbit).