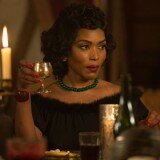 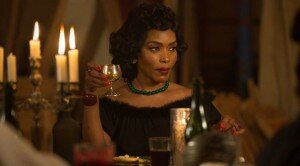 If one episode this season has been indicative of Freak Show‘s potential, it was from a couple weeks ago during the episode “Orphans”. The episode was an hour of television that actually delved into the mind and true-to-life issues of a Freak Show participant. Slowing down and giving us lots of back story on several minor characters was one of the most interesting things this show has done in its four season run. We were actually led to care about these characters, instead of just seeing them as varying degrees of awful.

Now, on the other hand, we have “Show Stoppers,” an episode indicative of the show’s squandered potential. I mentioned during last week’s review that introducing a prominent side character like Chester would be a challenge. Even giving a solid amount of time to his development during these last two episodes wasn’t well thought out enough to make an impact. Chester was an interesting idea, suffering PTSD in a time when it wasn’t as publicly acknowledged. He was a character that felt very much from the time period and that’s always admirable. Sadly, however, AHS remains ever faithful to the shock and attempted awe formula, giving us more characters that can end up damned by the end of the season.

“Show Stoppers”, which is this season’s penultimate episode, doesn’t so much set up for an ending as much as it gives us a glimpse of what to expect from it. Which is that the show will go out in its normal bloody fashion, no lessons learned, most characters being left with little or no solid ending. Tonight’s episode took out a few of the minor characters who didn’t truly have any purpose to begin with. Sorry, but seeing a character get sawn in half should be a much more intense moment than the one in tonight’s episode. Not only was it a depressing end to an already underwritten character, but it was totally against the character’s personality to jump on stage all of a sudden. Once again, the writers aren’t so much interested in making us care about characters as they are interested in mercilessly killing them off.

Speaking of terrible personality decisions and awful coincidences, this week had one of the most unlikely events in the show’s history. It’s probably sort of minor, but just as Jimmy is in need of prosthetics, Elsa’s old buddy and prosthetic maker just happens to finally have found her, apparently after years of searching. Good timing, guy. Because with Elsa selling the Show and getting out of dodge he might have just missed her!

The reason this review might seem scattershot is because that’s sort of the reflection this episode gave me. Not only is this episode all over the place but, when I look back, the whole season is all over the place. What started off as a wonderful premise, with promise of both depth and horror, wound up tripping over its own feet with extra characters, a plot line for each of those extra characters, and a level of disrespect towards proper storytelling that makes the rest of the seasons seem like Oscar-worthy scripts. Seriously, while each season of AHS may have its own random sensibilities, all three of them at least had a foreseeable progression. Freak Show just set up stories, only to see them abandoned. What happened to the townsfolk? What exactly made Elsa become such a conniving snake? How come Esmerelda only popped up when someone was needed for exposition? These are just some of the issues that have risen over the 13 episode series.

Most of this season can be summed up and represented by the first few scenes in “Show Stoppers”, in which the troupe dines with a doomed Stanley before pulling a revenge out a la Todd Browning’s Freaks. Now, it’s not that the show has tried to hide its obvious influences, and this scene would have been awesome. Except for the small fact that Elsa goes out of her way to mention the film by name during the dinner. I think most horror buffs would have gotten a subtle kick out of seeing the AHS style remake of Freaks famous murder sequence, and truthfully they did a decent job filming it, but having Elsa speak of it so blatantly completely took away the scene’s power. It’s the main issue with AHS over the years, the fact that they just don’t seem to trust their audience to figure this out on their own. I’m still holding out small hope the finale might offer us up something great, but from the looks of things this is another doomed ending to a series known for them.