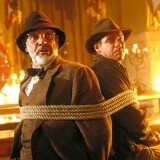 Summertime means different things to different people. For some, it means family vacations, road trips, and family reunions that you pretend you’re excited for. For others, the summer doesn’t truly begin until they hear those magic words: Steam Sale.

But forget about sunsets, beaches, hot weather, 75% off PC games. Nothing says “summer” like a solid movie marathon. Typically, my tradition has been marathons of the big three — Star Wars, Indiana Jones, and The Lord of the Rings. But this year, I’ll be doing something different. I’ve carefully hand-picked a new set of movie marathons based on a theme rather than a series. So if you’re feeling adventurous, check out these five epic movie marathons that will bring your summer to a perfect close.

The Fast And Also Furious Marathon

This blazing fast, gear shifting marathon is all about fast cars and slick driving. Each film is action packed and features some of the sexiest cars around. But also, each movie in this marathon is unique in its plot and action elements. Gone in 60 Seconds kicks off the marathon simply because, while entertaining, it probably is the weakest of the four films. Follow that with any of the Fast and Furious films, but personally I would choose Tokyo Drift because its separation from the rest of the series allows you to not feel bogged down by has-been action stars and rappers trying too hard to be funny.

Then, move on to The Italian Job to provide a more stable plot, A-list actors, and extra doses of comic relief. Italian Job will also give you a soft intro to Jason Statham before he brings the real heat in the marathon finale, The Transporter. Half car movie, half martial arts flick, Transporter will easily be the most original and entertaining film of the night.

You don’t know Jack! But you will after this marathon. The Jack Attack is a marathon of movies all featuring a protagonist named Jack, who, one way or another, will kick your ass. Whether it’s a brutal beat down, slick analytical skills, inconspicuous cunning, or snapping necks with legs, the Jack Attack marathon has it all.

Begin with 24: Redemption, a two-hour made-for-TV prequel that was created to bridge the gap between an entire year of 24 that was lost due to the 2007 Writers Guild strike. But don’t let its status as a TV movie fool you. Redemption has all the action and story that you’d expect from a regular season of 24. Next, lighten the mood a bit with everyone’s favorite pirate, Captain Jack Sparrow, in Pirates of the Caribbean: The Curse of the Black Pearl. Heaven forbid you watch any of the other Pirates movies.

After the swashbuckling adventures of Captain Jack, it’s time to get serious with Jack Ryan: Shadow Recruit. Note: You can substitute Shadow Recruit with either The Hunt for Red October, Patriot Games, or Clear and Present Danger. Just not The Sum of All Fears. Finally, bring it home with one of the most underrated action films in recent years, Jack Reacher.

The My Dad Used to Watch This Show Marathon

You know that feeling you get when you’re watching a movie and your dad tells you that he used to watch the show the movie is based on? Maybe you believed him, and maybe not. But chances are you probably thought his age actually outdated television itself. Well, it turns out that your dad actually had pretty good taste, and this marathon highlights film adaptations of his favorite TV shows.

Get your goofball on and start with Get Smart, which originally aired in 1965. Though ridiculous and groan-worthy, Steve Carrell’s humor is enough to make this movie worth your time. Then, ditch the funny business and go with whichever Mission: Impossible film you feel like.

The Blues Brothers role in this marathon is to split up the action and espionage that will dominate the rest of the evening. The rockin’ tunes of Jake and Elwood will provide you with renewed energy as you head out the door and to the closest theater to catch the release of Guy Ritchie’s brand new adaptation of The Man from U.N.C.L.E.

Alternate viewing order: Have Blues Brothers and M:I switch places, and take in a double showing at the theater, first of Rogue Nation, then U.N.C.L.E.

Movies:
Get Smart
Mission: Impossible
The Blues Brothers
The Man from U.N.C.L.E.

Marathon Length:
Approximately 8 hours, depending on your Mission: Impossible choice.

Knights. Armor. Magic. Princesses. Kings and Queens. Mystical creatures. Getting the picture yet? The Mission/Quest/Thing showcases some of the best medieval and fantasy films in recent years, and features two movies from the “big three” marathons. Begin with Snow White and the Huntsman. Why, you may ask? Because Chris Hemsworth, that’s why. Hemsworth is enough to hold the grimacing smirk of Kristen Stewart at bay. The second film in the marathon is the fun, comical, and lighthearted A Knight’s Tale, during which you can bask in the glory of everything that is Paul Bettany.

The order of the next two films is completely up to you. Both movies are perfect, and serve as dramatic conclusions to their respective series’, So whether you begin with Indiana Jones and the Last Crusade, or The Lord of the Rings: The Return of the King, it doesn’t really matter. But one thing’s for certain: If you’re looking for the most epic way to end a movie marathon, these two films are, quite simply, the best of the best.

Movies:
Snow White and the Huntsman
A Knight’s Tale
Indiana Jones and the Last Crusade
The Lord of the Rings: The Return of the King (the more extended, the better)