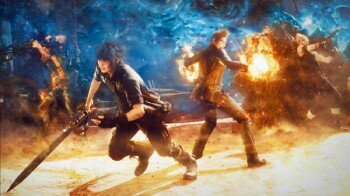 This week marks the release of Final Fantasy Type-0, and with it, the Final Fantasy XV: Episode Duscae demo. While there is a ton to say about the demo already, there’s really only one thing that you really need to know. Yes, summons are in it, and they are really, really cool. Specifically the Lord of Levin, Ramuh is in the demo, utilizing his lightning attack Judgement Bolt to swift put an end to enemies that bring the main character to 0 HP in battle.

In order to unlock Ramuh, the player must first find him. Don’t worry, courtesy of Arekkz and his channel Arekkz Gaming, we have a guide to get you the ability to summon down judgement from the skies. Players will need to venture into a dark cave in the southeast corner, grabbing a powerful Ancient Blade along the way. After clearly a room with a large amount of enemies, they’ll find a mysterious tree that will bestow Noctis with Ramuh’s blessing. After that, players will be able to summon him when their HP hits 0. The video is really epic, and completely scorches the ground with Ramuh’s crackling lightning. The Final Fantasy XV: Episode Duscae demo is only available with Final Fantasy Type-0, available now on PlayStation 4 and Xbox One.