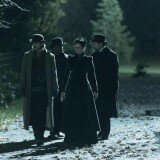 I’m not afraid to admit that I am having a tough time figuring out Penny Dreadful‘s game. Thus far, all three episodes have been different and interesting, each in its own specific way. The first episode did a good job setting up the characters; and now the second and third episodes have been carrying the ball. What’s strange, though, is that even though each episode is markedly good, the whole is still yet to be seen. One of the issues that I think the show needs to get past is how damn episodic everything feels.

When I take notes during the episode they wind up looking like a screenwriter’s beat sheet, neatly moving from one scene to the next without a whole lot of real transition.

While I found “Resurrection” to be a good episode on its own, the fact that each new episode seems to sort of forget about the last episode makes for an odd pacing. This episode essentially picks off where “Seance” left off, with Proteus being torn through, and a reveal of Victor’s first and true creation. I’m sort of sad, since I found Proteus to be an interesting take on the typical story of Frankenstein. His replacement, played by Rory Kinnear, is much more in line with the classic Mary Shelley monster, which is both good and bad depending on how you want to look at it. Personally, I was hoping for a bit more originality, but the way they showed Frankenstein’s Monster flashbacks was certainly a great part of the episode. In fact, it was probably the most interesting part, as most of the other characters didn’t seem to make huge strides this week.

Ives is visited by Mina in some sort of spectral form, begging for Ives’ help. The main story arc of the season has been dealing with Ives and Murray attempting to search for Mina, although it seems we spend an awful short amount of time with this plot per episode. Ethan (Josh Hartnett), continues to be shuffled into the background. We got to see a useless sex scene with him and the prostitute from the hotel. I must admit, I tire of sex scenes being spliced into every premium channel television episode. It’s one thing if the scene has a specific purpose, but if that purpose is to simply show off Hartnett’s ass, I have a hard time condoning it.

One particularly strange scene involved the group encountering a pack of wolves in the middle of the night. Maybe I missed something during this scene, because I still don’t quite understand what the point of the sequence was. It leads them to what I presume was the “ripper” from last week’s episode. A young boy, it turns out, with the taste for flesh and blood. The group brings him to Frankenstein and a typical exchange of dialogue, and moral analysis leads to some bickering between Ethan and the rest of the rag tag team. I am finding the group dynamic an interesting one but, again, a lot of the main storyline seems to be playing out in the background as we learn about the individual characters. It’s an interesting approach, but it also feels a little backwards. We are learning a lot about them now, instead of having it come progressively.

Another plot line I’m gathering is something to do with an ancient Egyptian curse that could bring about the end of the world. It’s been brought up on a limited basis during these episodes, and I am guessing that by the season finale we should have a clearer view of this plot in mind. I know it’s somewhat early to pass judgment, but I just don’t know how well this first season will end up coming together with just 5 more episodes. The show definitely has a plan for the long run, but in the short run, it’s ending up a bit too friable. I hope that in the next few episodes the show begins to focus in a bit. Get the characters on a similar page and start to tackle some bigger story ideas. So far so good, but if the show keeps up like this, it’s not going to come together the way it needs to. Here’s hoping for the best as always!