“Jack Is Back” Special Preview of ’24: Live Another Day’ Arrives 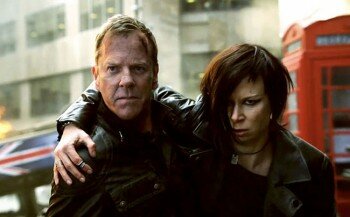 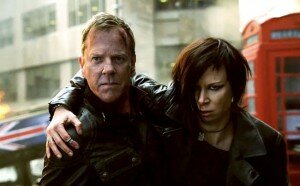 Fox has released a four segment Youtube series that gives us an extended preview of the upcoming ’24: Live Another Day’. The series of videos is rife with interviews, behind the scenes footage and short clips that paint a very detailed picture of the current state of 24’s world and characters.

In one of the interview segments, Kiefer Sutherland (Bauer) described how the ideas and work of lead writer Howard Gordon enticed him to return for this new series. Sutherland isn’t the only veteran to return for the project. Executive producers Evan Kants and Many Coto and Director Jon Cassar have also returned along with Marilyn Rajskub as fan favorite techie Chloe O’Brian.

The new series finds Jack Bauer in London where he’s resurfaced from 4 years in hiding to stop an assassination attempt on President Heller (William Devane) Heller’s daughter Audrey Raines (Kim Raver), an old flame of Jack’s, is part of her father’s delegation. A new cast of CIA operatives including Yvonne Strahovski, Benjamin Bratt and Gbenga Akinnagbe are also on hand to protect the President and discern Jack’s motive and purpose for reappearing. It’s particularly exciting to see Michelle Fairley play the initial villain in the series (anybody who’s followed the regular ‘24’ series knows that the first villain you’re introduced to is never the villain Jack confronts by the end of the season.)

Based on the preview, the show seems to be keeping with its predecessor in being unafraid to deal with contemporary political issues and controversial subject matter. The new crew Chloe has fallen in with specializes in whistle -blowing government secrets and President Heller is in London negotiating on the use of automated drones.

The series cast and crew are also mindful of some of the cultural precedents the original show set. “24…was really a catalyst for how television was viewed, and is viewed,” Raver says, in her interview, “24 was one of the first binge watching shows.” These days, there’s a long running, deeply involving, suspenseful ensemble tv show for just about all tastes.

’24: Live Another Day’ will start ticking on television screens everywhere May 5th.