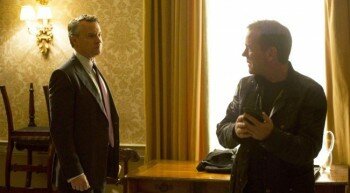 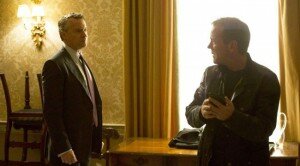 Damn, Simone is having a rough day.

I mean, almost everybody on 24: Live Another Day has a rough day and nobody has rougher days than Jack Bauer, but I felt particularly bad for Simone this episode.

After Margot Al-Harazi and her children successfully duped the CIA into a drone strike trap, President Heller reconsiders his refusal to let Jack Bauer try and infiltrate an arms dealer in London that has done business with Al-Harazi. CIA head Navarro and Agent Ritter survived the drone strike, but Margot still has six US stealth drones under her control. With the President’s support, Bauer gets the gear he needs and convinces Navarro to assign the dismissed agent Kate Morgan to him.

While Bauer is getting ready to deploy, he’s visited by Chief of Staff Mark Boudreau. He says he knows that Audrey visited Jack earlier and wants to know what they talked about. Jack suggests that he ask her. Mark finally comes out with it and says that he wants to know if Jack will leave Audrey alone. Jack assures him that, by the end of the day, he’ll likely be dead or in prison, so he should be the least of Mark’s concerns. Seeming as though he wants to minimize some tension between them, Jack tells him that Audrey said Mark was good to her and a good man, even though when Jack asked Audrey those questions, she gave no audible answer.

There’s still that sneaky matter of Mark Boudreau forging the President’s signature on an executive order to hand over Jack Bauer to the Russians, the ones who want his head the most. A Russian official calls Boudreau and asks when he might expect to collect Jack Bauer. Now that Jack Bauer is out in the field under President Heller’s orders, Boudreau has some explaining to do. He tells the Russians that the President is unavailable to confirm the transfer, but they’re not giving up on Jack Bauer so easily and he tells Mark that he expects to hear from him again later today.

I mean, seriously, how did Mark think that forging the President’s signature wouldn’t get him into trouble? I foresee a confrontation between Heller, Audrey and Mark that may involve slaps to the face.

Bauer picks up Kate and tells her his crazy plan to get the arms deal Karl Rask to give them the info on Al-Harazi. Bauer’s last contact with Rask was on an inside job that Jack turned on Rask for, so things between them aren’t so tight right now. Jack plans to explain that another operative of Rask was a CIA informant and that Jack has captured agent Morgan as reparation attached to the money he originally owed him. Thanks to Chloe’s tech-spertise, this is all set up in a fake haven account programmed to plant a virus into Rask’s computers that will give them access to all his communications and hopefully lead them to Al-Harazi.

It’s a huge leap of faith for Kate, who is basically trusting Jack to get Rask to sign into their trap account before Rask’s goons get the chance to wake her from sedation, interrogate her and torture her. Jack says that he won’t force her to do it, but Kate grabs the sedative herself and injects it into her neck. Geez.

Back at the executive side of things, British Prime Minister Davies isn’t happy that US drones are being hijacked to carry out attacks on his soil and even less that Heller’s agencies can’t seem to stop things from getting out of their hands. He’s even more skeptical when Heller tells him that he’s assigned Jack Bauer, the wanted fugitive with arrest warrants from multiple countries, to follow this new covert lead. And, to top it all off, he receives intelligence that Heller is suffering from Alzheimer’s.

So what does Alastair (Stephen Fry) Davies do? He monitors Jack Bauer himself. Through thermal surveillance, he sees Jack dragging a limp Kate Morgan into his trunk and assumes that Bauer has betrayed the CIA. He dispatches his own MI5 team to follow Jack. Why does every executive official assume malicious intent on Jack’s part? Hasn’t Jack earned the benefit of the doubt yet?

Meanwhile, Margot’s execution of Simone’s husband Naveed for treachery, turns out to be rather untimely. Just as her thugs are about to wrap Naveed up for good a phone on his body begins ringing. Naveed’s worried sister leaves him a message asking about leaving the country. Margot immediately concludes that Naveed telling his sister about their plans is a risky loose end they cannot afford, so she dispatches her daughter again to contain the situation. But this time it’s not some sleazy hacker she has to terminate, this is her own sister-in-law and, as we soon see, her niece.

When Simone arrives at the meeting place instead of Naveed, his sister Farah is immediately suspicious, but Simone manages to reassure her enough to be invited for dinner, fawning over her adoring niece Yasmine.

Jack pulls into Rask’s hideout and his vehicle is immediately fired upon. No one has a warm welcome for Jack, but despite taking a punch and a kick, Jack sells his cover story to Rask well, but he says that he wants to wake Morgan immediately and interrogate her. Jack has to make it look like he’s making good with Rask so he watches helplessly as they cart Morgan away.

The tension runs rampant as Jack tries to get Rask to access the trapped account so he can make a break for it and get Morgan out of there. They hoist Morgan up with her hands tied behind her back and drench her in (oil? I think?) and cut her leg. Rask grills Jack on his fake account but Chloe gives him the info to call Rask’s bluff on the details, despite Rask pointing a gun at Jack’s head.

But finally the lit match for this powder keg is the arrival of an MI5 assault squad which opens fire on the hideout just as Rask is about to login to his account and right before his thugs are about to start drilling holes into Agent Morgan. Pandemonium reigns. Rask and MI5 are locked in a fierce firefight, Morgan manages to lock her legs around the neck of her torturer, and Jack has to crawl to the laptop and press the enter key to crack open Rask’s contacts.

MI5 subdues Rask and Jack with Jack shouting in his no-nonsense hoarse voice that “HE’S ON AN UNDERCOVER MISSION FROM THE PRESIDENT OF THE UNITED STATES!” RAWR! Rask isn’t going down so easy. He snatches a grenade from an MI5 agent and detonates it. In the stunned confusion and ruble, Jack will, presumably, give the British the slip with Chloe assuring him that she’s tracing the most likely high sum transaction that could be to Al-Harazi from Rask’s contacts.

And who does this number belong to? Simone Al-harazi of course! We return to Simone visibly struggling to focus on her mission and not blurt out everything that her family has done. Farah keeps asking about Naveed. What’s happened to him? Finally Simone whispers, “You and Yasmine need to leave the country now.” Farah is confused, and horrified when she sees that Simone is clutching her switch blade at her side. Farah decides to do what any rational person would do in his situation, call the fuzz. But, as usual for 24, innocents who do the sensible thing always suffer for it. Simone tries to prevent her, but her knife finds its way into her gut and Simone’s eyes go wide in horror as her sister-in-law slumps to the floor, dead. And I swear, it was like like Black Mamba killing Copperhead, because who was watching from the stairs was the whole time? Yasmine.

Yasmine runs out of the house aimlessly into the streets with Simone in hot pursuit. But unfortunately, a double decker bus comes to a stop in Simone’s face, leaving her bloody and splayed in the street. Fortunately for her, it seems like pedestrian witnesses were calling for ambulances.

So let’s tally here; Simone barely escapes a firefight with Derrick Yates in the beginning of the day, cuts herself to slip away from Jack, comes home to find out her husband is plotting to escape from her mother, gets her pinky cut off by her mother for telling on her husband, watches as her mother kills her husband, accidentally kills her sister-in-law and gets hit by a bus. Oy vey. Doesn’t help that Margot seems pretty insensitive to her children’s emotional distress, especially when she slaps her son for pointing out that Simone really loved Naveed. Don’t doubt Simone, or question me, Margot intones, with tranquil fury. Simone was clearly capable of killing, but she certainly didn’t expect that today’s dead would include family by her own hands.

And it seems we’re finally into the season enough for a traitor reveal, and what an intriguing reveal it is. CIA techie Jordan Reed, stumbles onto some nearly wiped data regarding Kate’s former husband, who we learn earlier in the season was implicated in selling government secrets to the Chinese. This is the reason why Kate is being transferred back to the US and why everybody is giving her a hard time for missing something like this in her own husband. But what if there was nothing to be found in the first place?

Navarro insistently tells Jordan to focus on finding Al-Harazi, but then for the very last scene of the episode, the half-way point of the season, mind you, we see Navarro making a scrambled call to a voice-masked Brit, telling him that Jordan is on to him. The voice says to head him off, and that if the evidence you PLANTED AGAINST ADAM MORGAN (marked for emphasis) is discovered, we can’t protect you.

WOW! This is huge. So not only is Kate not wrong about her husband, but Adam Morgan was framed for a traitor and the party responsible is still pulling strings inside the CIA! Betrayals mean nothing if it’s not from someone you trust, but all the same, I liked Navarro. Now that he’s been revealed to have his own ulterior motives, it will be a whole new dynamic for the viewer at the CIA. The big question is, who was it that Navarro was talking to? The voice sounded British through the scrambler, but are they connected to Al-Harazi? Is the selling of secrets to the Chinese part of the same plot? Hard to say.

BUT! With Half of the season in the bag, 24: Live Another Day seems set to raise the stakes even further, with Jack, Kate and Chloe racing to get to Simone before Margot is forced to take even more drastic measures to contain the situation. Stay tuned next week and we might see the scene that inspired that famous poster of Jack screaming and shooting and carrying Chloe away from the burning wreckage of a London bus!