With the premiere of ’24: Live Another Day’ fast approaching, it’s worth looking back at the original ’24′ television series and remembering what made the show such a hit. The suspenseful action, the complex schemes, the political intrigues, the personal and interpersonal conflicts and the moments of improbable heroism and noble sacrifices all made ‘24’ one of the most popular shows on TV during its 8 season run. For old fans looking for a refresher and for newcomers looking to see what ’24′ is all about, here’s a short list of moments that best exemplify the series. These are moments of heart-pounding suspense, tear jerking heartbreak, game changing shockers and fist pumping awesomeness that made the series what it is. It should go without saying, but SPOILERS ABOUND!

The Death of Teri Bauer (Season 1)

The culmination of Season 1’s intricate web of treachery and suspense – the death of Jack’s wife at the hands of his friend and coworker Nina Myers – would impact Jack and his daughter Kim for at least the next 3 seasons. Teri and Kim had been kidnapped to blackmail Jack into trying to assassinate African-American Presidential candidate, David Palmer. Over the course of the day, Jack freed his family from the Drazens and brought them safely to CTU (Counter Terrorist Unit) Los Angeles, only to find that Nina Myers had lied to him about his daughter’s death to send him into a suicidal assault against the Drazens. Only not suicidal for Jack, who takes out the Drazens, clues into Nina’s lie and races back to CTU before Nina can escape. She’s captured but not before putting a bullet in Teri. The Season closes out on Jack cradling the body of his wife.

Teri’s death would drive a wedge between Jack and Kim, an inescapable reminder of the kind of toll Jack’s work can take on a family. The lingering pain of Teri’s loss and the desire for vengeance would fuel Jack as Nina reappeared as antagonist in Seasons 2 and 3. In Season 3 Jack would even have to convince Nina that he was completely over Teri’s Death to gain her trust in a drug sting operation. Jack and Fans would finally get the revenge they wanted later that season. With Kim’s help, Jack killed Nina execution style as she desperately tried to slink away. 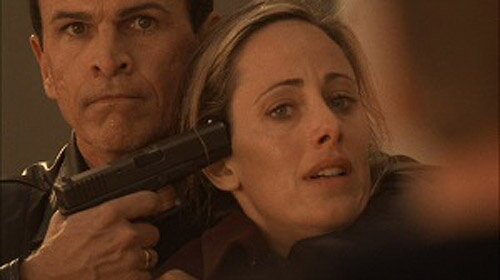 Season 4 saw Jack start off with a new love interest, Audrey Raines, daughter of Secretary of Defense James Heller. The season opens with Raines and Heller getting abducted by terrorists on American soil; the terrorist sub-cell, led by Omar, planned to stage an online execution of Secretary Heller. Deciding that killing the Secretary and the terrorists in one fell swoop would be preferable to the national embarrassment of an execution, CTU orders a tactical strike on the compound where the execution is being staged. Jack is ordered to retreat, but like so often over the course of the series, he defies his superiors and goes in alone to rescue Heller and Audrey.

Jack crashes the broadcast, frees Heller and corners Omar who has Audrey hostage at gun point. Just then, the SWAT teams helicopter in. Determined to make Jack suffer, Omar prepares to shoot Audrey before succumbing, but Audrey stabs him with a concealed blade, wriggles free, and SWAT opens fire. Jack saves the day, rescues his loved one and proves once again that his superiors should just listen to him.

This sort of trouble is also what strains Jack and Audrey’s relationship and Audrey even gets captured and tortured by the Chinese in between the fifth and sixth seasons. This traumatic past will certainly bear on both Jack and Audrey in ‘Live Another Day’.

The Assassination of President Palmer (Season 5)

Season 4 concluded with Jack faking his own death to escape being imprisoned by the Chinese, who blamed him for an operation that caused the death of their American consul. The only people who knew about his survival were his three friends involved in his death, Chloe O’Brien, Tony Almeda and Michelle Dessler, and his longtime ally President David Palmer.

Now imagine that for the Season 5 introduction, all but one of these four characters who have made it through 4 whole seasons, are suddenly, violently killed off all before the first commercial break. Well, that’s exactly what happened. President Palmer is sniped though a hotel window and Michelle and Tony are blown up by a car bomb in their driveway. Chloe, the sole surviving keeper of the secret of Jack’s survival figures out that someone is carrying out hits on Jacks old friends and calls Jack back from his new civilian life to avenge his murdered friends and stop a whole new terrorist threat. Even for long time fans, the opening of Season 5 made it clear beyond a shadow of a doubt that ’24′ was a series in which ANYONE could die. Like Teri’s death at the end of Season 1, this triple anvil drop would shape events for the rest of the series and stick in Jack’s and the viewers’ memories forever.

As if the opening segment didn’t go far enough to thin out the show’s returning cast, halfway through the season, another bombshell was dropped. The season followed Jack’s search for stolen canisters of deadly Sentox Nerve Gas. The culprits snuck a canister into CTU’s ventilation system and before anyone knew what was happening half the staff was collapsing in violent shivers and choking to death. Jack, Chloe and most of the good guys managed to secure themselves in airtight rooms but Edgar Styles, another portly lovable techie and a good friend of Chloe’s gets trapped and suffocates on the opposite side of the glass from her.

To make the whole situation even more desperate, Kim was also in CTU at the time, being briefed on her father returning from the dead. She and the rest of the heroes survive the attack due to some heroic sacrifices of the season’s guest stars. It was a particularly tense moment for Jack and Kim, about to be reunited with her presumed dead father, only to be painfully reminded what happens when Jack’s work strikes close to home.

Over the course of the original series, CTU HQ LA has been invaded, bombed, hit with an EMP, and infiltrated by more moles than an earthworm heap. But the nerve gas spike in Season 5 was the most gut wrenching by far, since, out of all the attacks like it, it had the most number of characters threatened and killed the longest running character and arguably most loved.

Jack Bauer is a dangerous man, dangerous to get close to and even more dangerous to his enemies. Renee Walker, and the great number of baddies involved in her vindictive death, found that out the hard way. Renee was a late series character, only entering in Season 7, but her connection with Jack became very strong. The two of them made a great team and Jack helped her through some traumatic missions and experiences over the last two seasons, becoming Jack’s distaff counterpart after a fashion. Unfortunately, just as the two finally give into their attraction, she’s sniped in the gut. Jack carries her wrapped in her bloodied bed sheet down to a cab and rides her to a hospital, but it’s too late.

This loss proves to be one too many for Jack. The roaring rampage of revenge that Jack sets out on to avenge Renee and uncover the conspiracy behind the day’s events, is truly EPIC. He steals a helicopter, breaks out and kills a CTU prisoner, tracks down and disembowels Renee’s killer to get a SIM card that he swallowed, mounts a one mad assault on Charles Logan’s motorcade complete with full body Kevlar, automatic rifles, a M26 MASS shotgun and tear gas canisters, infiltrates the Russian Foreign Minister’s safe house, kills his men and impales him upon a golden rod. The only thing that stopped him from sniping the Russian President was Chloe’s insistence.

This crowning moment of righteous badassery was about as best as any ’24′ fan could reasonably hope for in Jack’s final season and it wrapped up with another hard realization of what’s right, thanks to some tough help from Jack’s now oldest and most trusted friend. Epic and Memorable. We’ll have to wait and see if the brains and brawn, conscious and active dynamic between Chloe and Jack has changed or remained intact for ‘Live Another Day’.

It’s moments like these that we hope to see again with the return of the 24 tv series in ‘Live Another Day’. Moments of improbable heroics in dire situations, shocking reveals and heartbreaking deaths that made the original series some of the most compulsively watchable TV of the new millennium. What moments from the original series do you remember the most? Let us know in the comments below! Tune in Monday May 5th at 8PM/7PM Pacific on Fox to catch the premiere.