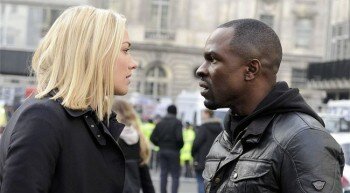 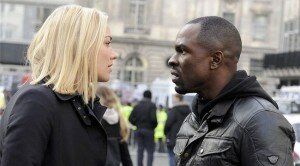 I knew Naveed was a goner.

Anyway…with CIA agent Kate Morgan pulling a pretty brazen yoink on Jack Bauer from right out of the marines’ crosshairs and secretly transmitting Chris Tanner’s drone flight key to Chloe at Open Cell, it seems like Heller and Jack are making some headway against Margot’s drone hijacking plot. Just in time too by the looks of it. After Margot proved that she was willing to cut off her own daughter’s left finger to get her daughter’s husband to pilot the hijack drones, the first of her strikes are set for within the hour.

While federal agents escorted Jack to custody at Heller’s London office, Chloe, Adrian and Kate discover an override code embedded in the flight key, sufficient evidence to prove that Tanner’s drone was hijacked and that others are sure to be taken imminently. President Heller, Audrey and Mark Boudreau realize that Jack was right and Heller immediately orders the entire US drone fleet grounded.

Margot and Naveed see that the drones are being grounded and Margot orders him to transmit the override code to as many drones as possible now. Six drones come under her control and Heller watches in horror as each of them deviate from their grounding routes, then disappear altogether.

Jack arrives at the US London delegation and is visited by Heller who immediately tells him that he was right and that Al-Harazi has presumably taken control of 6 US drones. Heller asks Jack if he knows anything else about Al-Harazi that might help them take her down. Jack mentions an arms dealer that he knows has dealt with her, but is adamant that a government raid and capture will fail and waste valuable time. Heller is reluctant to allow Jack to go back out into the field and infiltrate the contact on his own, especially with all he’s done already today and the Russians still wanting his head. Jack spells it out for Heller thusly; if he wants to bring down Al-Harazi, he’s going to have to do it Jack’s way. Yep, pretty much.

Back at the Al-Harazi House, Margot tries to repair the damage between herself and her daughter. She sits by Simone’s side on the bed and we can see the hurt and apprehension on Simone’s face. Margot tells her that she knows Simone is in pain and confused, but that what happened wasn’t her fault and that she wouldn’t be punished for Naveed’s mistakes again.

Margot then releases a prerecorded tape to the intelligence stage which Heller and the CIA watch with trepidation. Margot blames Heller personally for the drone strike that killed her husband, several innocent children and nearly her. She says that, unlike Heller, she doesn’t want innocents to suffer, but that unless he surrenders himself to her under specified circumstances, she will follow through with her drone attacks on London. Heller demands to see the footage from the drone strike Margot refers to.

Open Cell gets wind of this threat and Adrian Cross decides that they’ve helped Bauer do want he wanted to do and it’s time to move on. Chloe isn’t going anywhere and her conflicting loyalties finally come to a tipping point when Adrian insists that she comes along with the rest of his cell. But of course, Chloe stays to help Jack and the CIA avert Margot’s attacks, as we knew she would.

Naveed is plotting the trajectories of their first drone attach. He convinces Margot to let him see Simone. Simone confesses that she didn’t think her mother would do that. Naveed reveals that he’s slipped a tip off of their location into the video that Margot posted and that when the authorities arrive he’ll make sure that Simone appears as though she was coerced by her mother. Simone doesn’t react beyond smiling gratefully. Is Naveed really this stupid? How does he expect to get away with this?

Heller and Boudreau review the footage from the drone strike that killed Margot’s husband which clearly shows a woman crawling away from the wreckage and the bodies of children. Heller is outraged. He asks why he never knew about this or saw the footage before. Mark falls back on his excuse that he was doing what was necessary to protect the president’s peace of mind and political high ground. Heller’s not buying it and says that Boudreau didn’t trust him with the truth and that since children died in drone strikes by his administration, half the world is going to agree with Al-Harazi in blaming him. Ouch.

Jack is still being held at the US delegation when lo and behold, Audrey pays him a visit. Ever since Kim Raver was confirmed to return as Audrey Raines (sorry, Boudreau), we knew that Jack and Audrey meeting again would be inevitable. The moment doesn’t disappoint. Both of them immediately start tearing up and both admit that they don’t know where to begin. Audrey offers a flimsy excuse for coming in that she’s letting Jack know they have a lead on Al-Harazi, but that quickly falls away as the two are inexorably drawn to each other. No hug, no kiss, not yet any way, but an affectionate head-bop. Jack asks Audrey if she’s happy in her marriage, to which Audrey has no answer. She says that she shouldn’t have doubted Jack, but he says that he really did kill all those Russians in a furious rage. Both of the mixed feelings and awkwardness is palpable with breathy, sparse phrases, but Jack ultimately urges Audrey to go, presumably before Jack gives into the urge to plant a big ol’ wet one on Audrey.

Meanwhile at the CIA, Kate is being forced to sit on the sidelines after her hijinks and being in between transfers. CIA techs find the tip off in Margot’s video that Naveed supposedly placed and Navarro is personally leading a team to raid the location. But, once again, Kate just doesn’t like it when things go to easy. She discretely contacts Chloe and asks her to dig a bit more into the video and sure enough she discovers that the IP addresses don’t match. The mansion that Navarro is raiding is a decoy and the first of Al-Harazi’s stolen drones are launching their first attack right at it. Margot caught Naveed’s leak and set a trap for the CIA. Ritter and Navarro are barely outside the building when the drone missile hits and turns the 4-story mansion into a pile of rubble. I expect they’ll both make it out alive.

Naveed is nervously checking his watch, surely expecting a CIA raid any moment, but Margot quietly intones, “They’re not coming Naveed.” In the Al-Harazi basement, Margot glares coldly at Naveed while one of her thugs beats him, saying that she trusted her daughter with him and treated him like a son and that he has outlived his usefulness since Simone’s brother can clearly pilot the drones. Naveed’s protests for his life for the sake of Simone’s happiness are futile since Simone stands on the basement steps and doesn’t lift a finger to stop Margot putting a bullet in Naveed’s head.

We got a quite a bit along in this episode. The action was so continuous from the previous episode that I might reconsider my earlier assessment about episode four being the end of the season’s “first act”. Though of course, we’ll have to wait to see the season in its entirety before we can make definitive calls on that front.

It was gratifying to see Mark admit to Audrey that he was wrong about Jack and his assertions. And then frustrating to see him play string-pulling poster boy for the benefits of drone warfare again, arguing with Heller when he was trying to be understanding about the drawbacks of same. I mean, covering up child casualties of drone strikes and not being able to detect our own stealth drones? Sounds pretty shoddy to me.

In the original 24 series when an Evidence Plot Device needs to be brought to the authorities so a terrorist plot can be stopped, such as Tanner’s flight key, there’s usually a couple of episodes of frustrating bureaucracy or conflicting interest separating the Plot Device from its designated recipient. We could probably chalk it up to the halved season length, but it was still so refreshing to see the override code in the flight key taken immediately as the proof that it was. Of course, in 24, the good guys can only get so far so fast, so it was a safe bet that Navarro’s raid on the decoy estate was going to be a disaster.

Whatever shock Simone felt at her mother mutilating her to force Naveed’s hand, it clearly wasn’t enough to shake her loyalty to her mother and her belief in their cause, not when Naveed revealed that he had already acted to betray their location. Simone watches with cold resignation as her mother executes her husband.

This episode made me wonder again about the more ordinary context of Simone and Naveed’s relationship and how well either of them really knew the other. When Naveed confided that he planned for them both to escape, Simone told her mother and both she and Naveed were punished for it. Did he really think that Simone wouldn’t rat him out again when he confided even deeper treachery against her mother’s campaign? He may have understandably felt that Margot having Simone’s pinky finger cut off might have marred her loyalty to her mother enough to go along with this. But clearly, Simone’s belief in the Al-Harazi family’s mission and her loyalty to her mother is harder to shake than Naveed thought. Seems the worst part for him was realizing that Simone wasn’t even going to try and stop her mother from murdering him.

With a hijacked drone having launched a successful attack against London soil and the CIA being duped again, Heller is probably going to reconsider having Jack stay put and let him make his play with this arms dealer. I’m personally eager to see the Al-Harazi family dynamic at work without the conscience of Naveed getting in Margot’s way and how his death will affect Simone, if at all. Will Jack and Audrey get any other chances to speak? What could possibly be said or built between the two now?

It’s also strange to think that with the next episode we will already be half way through ‘Live Another Day’! It has sure been a hell of day so far for Jack, Chloe and Heller’s delegation. So far, the show has done a great job of keeping the excitement and suspense high while giving the feeling that the show is still building to its biggest twists and payoffs further in the day. We’ll be dutifully waiting to see what develops!