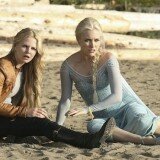 Once Upon A Time Season 4 Episode 9 Review, “Fall” 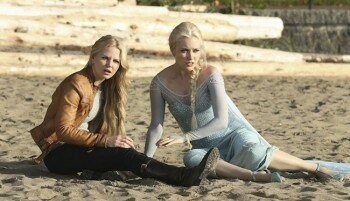 I’m unclear about a bunch of things. Which is a shame because last night’s episode of Once Upon A Time had some of the best suspense and weighty character moments of the season so far, in my humble opinion.

Best stop myself from getting ahead of myself for a bit.

So with the Snow Queen’s spell of shattered sight falling imminently upon Storybrooke, everyone is desperate to try and find a way to keep themselves safe and set up a safe guard to counteract the spell once it hits.

Belle and the fairies lead by Mother Superior are fussing away devising a solution that calls for a person who has been affected by the same curse before and recovered. Who could that be but Anna, who we’ll well remember from last episode being cursed by the Snow Queen to trap Elsa in the urn.

There’s just that pesky problem of Anna still being completely missing from Storybrooke. The Snow Queen’s wall of ice grows and repels attempts to scale and break it, subverting any plan that might involve escaping the curse logistically.

So the episode does the clever thing of linking the culmination of the Arendelle sister reunion, what we’ve been waiting 8 episodes for, directly to the tentative curse solution. The tension is higher than ever.

Elsa gives the Charmings the slip and switch so that she can go after Anna with a locator spell on the snowflake necklace she gifted her. Emma tags along, deciding that now that Elsa has made a choice, she might as well give her all the help that she can.

In Arendelle’s past (actually present, but we’ll get to that) Anna and Hans are restored from the deep freeze that the Snow Queen put them in the last time we saw them.

And then we get to the part of the episode that felt the weakest to me. Anna finds a lone left-behind strand of gold straw in the castle, deduces that Rumpelstiltskin was there, guesses that he must have the urn that Elsa is now trapped in, decides after a bunch of coincidental musings that the best thing to do is to bargain for the fabled wishing star pendant from the pirate Blackbeard, and use that to wish Elsa back to him.

Got all that Oncers? The explanation felt kinda rushed to me too.

Dind’t help for that part of the episode that Hans was one step ahead of Anna and Kristoff the whole time. #@$%in’ Hans.

Hans and Blackbeard spring a trap on Anna and Kristoff and plan to lock them in a trunk and cast them overboard. Fortunately before they close the trunk Hans lets it slip that Arendelle and everyone in side had actually been frozen for 30 years.

Well what do ya know! Elsa was worried about that too! What a convenient way to keep all these iconic characters around their same age and played by the same actors.

Elsa and Emma are lead to the beach by the snowflake pendant, but its glowing proximity indicator starts to fade as Anna and Kristoff drown. Emma tries to console her, but in her desperation she intones to the pendant that she just wishes Anna was with her.

Lo and behold, out pops the open trunk onto the shore. The reunion of Elsa and Anna is every bit as frantic and ecstatic and funny as I could have hoped for. They even get to sneak in some bemused remarks from Anna about how strange the non-magical world is. With the sisters reunited and the solution to the curse counteraction secured, they set off to return to the fairies.

But, like plenty of times before, Rumpel’s villain timing is infuriating. Having made a last minute deal with the Snow Queen to not kill her if she permits him to escape with Belle and Henry, Rumpel takes advantage of the gathered fairies to suck up their magic into Sorcerers Hat, nearing his power threshold for freedom from his quintessential dagger.

Hook actually does the torturous deed, still swayed by Rumpel controlling his heart. With their counter curse ruined, Storybrooke, though now happily reunited all around, prepares for the worst.

Despite still being basically a supporting character, it was a good showcase episode for Snow, who found herself pushed to many difficult choices and frames of mind about what to do with this curse. She advocated sacrificing one for the many, and she accepted handing Neil off to Emma. It was really moving for me to see all of Storybrooke prepare for the impending nightmare, but Ginnifer Goodwin’s performance in that scene was most affecting for me. Jennifer Morrison also really got me. Major Captain Swan feels.

Now to my confusion.

The fact that the snow flake pendant was the wishing star kinda snuck up on me. I realized that it being the failsafe both Anna and Elsa were looking for was the reveal in, but I feel like I missed some lead in or clue in. Somewhere on Black Beard’s ship amidst Anna’s many double takes.

How exactly is the spell of shattered sight supposed to work? Does it turn people into their worst selves or does it make them see only the worst in others? Or does it do both? Seems like when Belle stared into the mirror and when Ingrid cast the curse on Anna in the past, it made them see the worst versions of themselves and Elsa respectively.

If that’s the case, wouldn’t the best defense against the curse be to isolate themselves (like Regina happened to do) and not to hide away together (like Snow and Charming happened to do)?

And I’ll admit that I thought the message in the bottle from Helga had been de facto revealed and that it was the truth about their magical family. But if that’s the case, why would they literary float this message back into the picture and still not have Elsa or Anna find it? What ultimate secret does it yet hold?!

Didn’t get to see much of the Snow Queen Herself, but that’s likely to change if Emma and Elsa and Anna are meant to undo the curse.

And how about those coming attractions? Who else is looking forward to Regina kicking it evil regal again?!

Once Upon A Time Season 4 Episode 11 Review, “Heroes and Villains”
All That's Retro