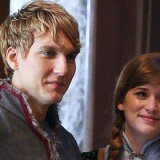 Once Upon A Time Season 4 Episode 11 Review, “Heroes and Villains” 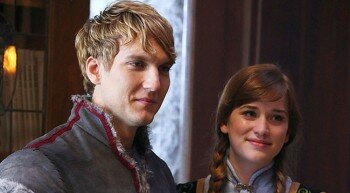 I don’t think there’s a major ship or camp of fans that didn’t get their fair share of EPIC FEELS in this midseason finale.

With the redemption in death for the Snow Queen and the lifting of her curse from Storybrooke, our heroes seem to be in for a well-deserved bit of down time.

But, of course, the writers have other plans, and a second half of the season to set up.

The border of Storybrooke is still acting as a self-containing barrier, and any who cross to the other side will lose any magical powers or affects and will not be able to return. Thus, Elsa and Anna must find a different way of getting home to Arendelle, especially since it’s still under the sway of the usurping Hans and his brothers.

Rumpel is also anxious. Since the Snow Queen’s plan failed, he’s still obligated to stay and keep up his converted appearances in Storybrooke, but he still has his dream of complete freedom in mind. He knows that Anna will remember him and his true intentions, so he’s eager to help speed Anna and Elsa back to Arendelle as well.

He still has Hook under his sway. With his heart firmly in his grasp, he controls Hook to saunter into Grannies and pitch Emma some convenient discovery of the portal door inside the Sorcerer’s house. Emma can tell something is wrong but the revelation is too important to ignore and she has no way of knowing exactly what is going on with Rumpel and Hook.

Another thing to take care of now that the Snow Queen’s Magic is gone is Marian. The curse on her has lifted and Regina is able to restore her heart to her body. Regina isn’t happy, but it seems to her that Marian knows now that Robin’s heart has moved on in the time he’s been apart from Marian, brief as it may have been for her.

Things seems to be getting on for the complicated Hood family, but then a strain of the Snow Queen’s curse, (let’s call it metastasizes) in Marian and she’s in danger of dying again. The only way to save her is send her over the Storybrooke town line into a world that will negate any magical damage to her. But it would be dangerous for her to go out into the real world all by herself. So who has to go with her? Robin.

Seriously? Once Upon A Time? This is Bull$#&%. This is one of the most contrived instances of keeping a ship apart that I can remember for a long time, and I’m including the crap you put Snow and Charming through.

It was painful watching Marian, then Roland the Robin step through the barrier with a tearful last kiss to Regina. But that was nothing to watching Regina rip up the Storybook page of the two of them kissing.

The episode also included a bit more backstory with Belle and Rumpel from the time when she was his maid.

The latest addition to Rumpel’s magical plot devices, comes in the form of an enchanted Gauntlet from Camelot (Wait, Camelot? Could that be a hint for the future?). The wearer can lead themselves to the weakness of whoever they desire.

Obviously a very powerful tool, one powerful enough to try and ransom from Rumpel with Belle as a captive. And who would make such a daring demand? The Queens of Darkness, Maleficent, Cruella and Ursula.

Rumpel reluctantly hands over the gauntlet and makes his usual pathetic attempt to cover up his care for Belle with callous cruelty.

Back in the present, Rumpel has told Belle to prepare for a proper Honeymoon to New York City. She’s packing, when Henry walks in (Belle sounds much better than Grandma) and offers to help. Along with the disturbing revelation that the town line is still up, Henry inadvertently unearths the Camelot Gauntlet. The last time Belle saw that, Rumpel had given it up. Her suspicions are roused again.

Elsa and Anna are about to depart for Arendelle, saying a fond farewell to the Charmings and Elsa especially to Emma. Anna is just about to step through the portal when she says offhandedly that he would have liked to meet this Mr. Gold, who so generously led them to the portal. Then Charming explains who he was in the Fairytale world.

Rumpelstiltskin? Anna says? Emma immediately realizes that Rumpel lied about not knowing Elsa’s sister. They race to the clock tower where Rumpel is about to activate the Hat and absorb enough power to break free of the dagger. Emma and Snow show up, but he freezes them, and he’s about to crush Hook’s heart, but Belle stops him, with the REAL dagger, which the Camelot Gauntlet led her to. His real weakness.

I’ve been saying this whole season how painful it would be when Belle discovered and confronted Rumpel on his treachery. And to my profound sadness, I was not disappointed.

At Belle’s mercy, Rumpel finally argues his true position, that power in and of itself is not a bad thing and that he was trying to let them live a life of freedom. But, as Belle tearfully points out, Rumpel has lied and hurt people to get what he wants, just as he had done in the past, after he had promised her he would change.

Belle’s shock and sadness that Rumpel has disappointed her is too much. With the dagger in hand, she forces Rumpel over the town line, and he collapses in a broken heap on the other side, crippled and magic-less.

Were being controlled by Zelina to hurt his loved ones and finding the Sorcerer’s hat really such frightening and tantalizing prompts for Rumpel to go back to his old ways? It seems, after all he’s been through, he really doesn’t have much of a concept of protecting himself, that doesn’t include manipulating and disempowering others. Even if that meant sacrificing everyone in Storybrooke to achieve greater power. Rumpel would have never considered being honest and relying on others.

But that’s not the end of Rumpel. We next see him in New York, seeking out the mundane version of Ursula, who tends an aquarium of dangerous marine life. Now he wants the Queens of Darkness’ help.

If Rumpel is indeed to be a full blown bad guy in the second half of the season, it’s going to be tough for the heroes. Even in the first season, he was always more the Magnificent Bastard than a true Big Bad. We don’t know quite yet just what his goals are in allying with the Queens of Darkness, but if he’s prepared to kill anyone who gets in the way of reclaiming his power, then I think it’s a distinct possibility that Season 4 could see Rumpel killed off for real. The Heel-Face Revolving Door routine is getting old.

Personally I’m hoping he’ll go along with the Queens of Darkness just to get his powers back but ultimately undermine them and prove his heroism to everyone again, especially Belle. If they threaten Belle again, he’s not going to be happy. But, like she said, the true test will be if he can give up his powers voluntarily for her.

And Oh My God, that Frozen sendoff. PERFECT!

Once Upon A Time Season 4 Episode 10 Review, “Shattered Sight”
All That's Retro