Once Upon A Time Season 4 Episode 10 Review, “Shattered Sight” 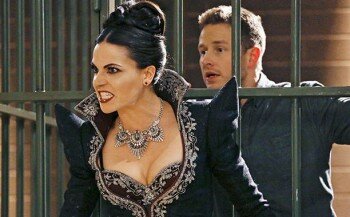 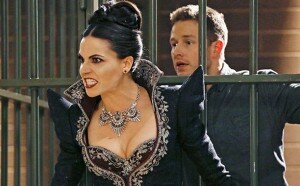 With the Snow Queen’s curse of shattered sight settling on the citizens of Storybrooke, Emma, Elsa and Anna, each immune because of the Snow Queen’s predilections, set about reversing the spell before every one destroys each other.

Since Elsa and Emma are the magical ones that Snow Queen wants most, Anna is left to babysit Neil and watch over the cursed Charmings and Christoff. Wouldn’t have been my first plan. Anna’s pretty sensitive and bumbling. Not necessarily the best at handling people in moods ranging from sour to murderous.

But the plan to save Sorybrooke runs into bigger problems when Emma and Elsa discover that the childhood ribbons from Ingrid, Helga and Gerda are preventing them from using their magic against Ingrid. According to her, they are imbued with a love without equal.

Emma has the ingenious solution of counteracting the love with powerful hate magic. And who in Storybrooke would have a stronger magical hatred of Emma than Regina?

Of course getting to her means unleashing her from her self-containment while she’s in full on Evil Queen mode, complete with her old imposing dress. Such a treat. All it takes is for Emma to say that she deliberately brought Marian back from the past to screw Regina’s relationship with Robin over and the ribbons are easily incinerated.

Emma and Elsa flee, and Regina seeks Emma out at the sheriff’s office, but is equally delighted to find Snow and Charming. She magics Christoff and Anna away and conjures swords for herself and Snow, wanting to see her bleed.

The episode really managed to keep itself from coming across as too much of an excuse episode. And we still got to see the Charmings and Regina throw around old bad blood.

And we finally got to see Emma’s stay with Ingrid as a foster daughter. Man she was a terrible parent. Granted she didn’t have much in the way of good examples. She encouraged her daughter to stay when she was leaving on the basis of encouraging pranks. And she thrust her into a city street with oncoming traffic as a way of introducing her to the possibility that she was magical.

In the background, Hook is still entrapped by Rumpel to do his bidding. He dispatches him to retrieve Henry, the other person he cares enough about other than Belle, before leaving Storybrooke behind.

Rumpel’s selfishness is getting stale now. He’s basically been conniving and selfish for a couple of episodes while the curse has been stretched out. Hopefully by next week, with one arc wrapping up and another starting, things will get more interesting and less despicable for him.

By the way, marbles in the doorway. Classic, Henry.

Anna’s keeping a lid on the worst versions of the Charmings and her fiancé as well as I expected her to, as in, not at all well. Those scenes were some of the worst in terms of Anna’s usual disarming adorkableness feeling too grating and out of place. I know that’s one complaint fans have had, and I’ve usually been favorable to it. But her harping on technicalities and making awkward remarks felt the least helpful here.

She has to whack Christoff upside the head to get him under control. And whatever with!

Regina banishes them back to the chest on the shore from whence they came and we all remember what got washed up along with them right? Gerda’s message in a bottle!

Having broken the bottle over Christoff’s head, Anna picks up the message inside and realizes that she has to find Elsa and Emma.

We cut to Elsa and Emma confronting the Snow Queen in her frozen chamber. Surprise, surprise, she’s still smugly condescending in her stance that Elsa and Emma are meant to be her sisters and treats their skepticism and desire to protect their other loved ones as petulant.

She’s got crystalized happy memories she’s shared with each of them, then subsequently removed. She hopes to convince them that they can be a family, if only these silly ordinary people were out of the picture. Elsa and Emma are both evidently tempted, hesitating to strike at the Snow Queen, when Anna arrives.

And Finally, FINALLY we find out Gerda’s final message to her daughters that was sealed in the bottle and cast out to sea.

I was very pleased that the final reveal of the Snow Queen’s plot line wasn’t some contrived magical secret that could neutralize her powers. It was actually a sincere confession and reconciliation of the mistakes Gerda had made as a sister to Ingrid and as a mother to Elsa and her wish that Elsa and Anna restore Arendelle’s memory of her.

I also liked that Ingrid’s initial reaction to this revelation was doubt and outrage. Understandable since she had spent decades internalizing and brooding on the betrayal by her sister. I liked that Anna accepted Ingrid lashing out at her in her sincere attempt to make her hear the truth.

I liked Ingrid’s painful realization of her terrible treatment of Elsa, Emma and Anna and her sacrifice to undo her damage, happy to be loved by her family again and assured that they are reunited and safe. I expect many fans are going to have their hearts on the pavement over this one and that’s a good thing. Elizabeth Mitchell will be missed. She’s certainly been one of the most emotionally complex villains on Once Upon A Time.

With Ingrid’s sacrifice, the spell of shattered sight is lifted, and Snow, Charming and Regina have a great big laugh at themselves. Well-deserved happy reprieve all around.

This episode didn’t leave off with much of a lead in to the next episode, which will wrap up the Frozen arc and lead us into the anticipated triple villainess arc. I’m sure that Maleficent, Cruella and Ursula will be great. But right now, I’m most anxious about how this change is going to affect Rumpel. I suspect that the arrival of these new villains will somehow force him to stall his escape. Belle will be threatened, and his interests will, temporarily, again, be aligned with the Heroes’.

Once Upon A Time Season 4 Episode 11 Review, “Heroes and Villains”
All That's Retro