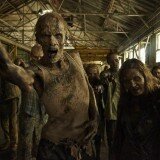 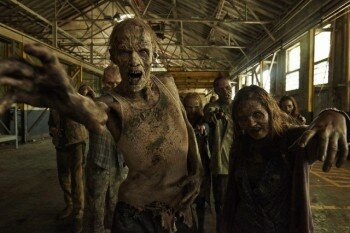 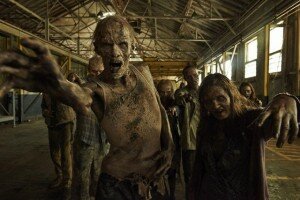 Since The Walking Dead has ended its fifth season, on a strong note I might add, today’s Top 5 is all about helping you fill the inevitable zombie void! Here are 5 Zombie centric media that will keep you on the edge of your seat until The Walking Dead returns later this year for Season 6!

Starting off with something obvious, The Walking Dead games from Telltale are a godsend for fans of the comics/TV show. In a lot of ways, the two games in the series are the best utilization of The Walking Dead universe thus far. Following the young protagonist Clementine, you navigate a virtual story inhabited with frightening zombies, tough decisions, and humans you may or may not be able to trust. In terms of emotional impact, few games have made me feel in the same way The Walking Dead has. It’s equal parts thrilling and heartbreaking. These games are not to be missed for zombie fans, or fans of great video games in general. Two games have been released so far and I highly recommend playing season one first since your decisions carry over into season 2. Season 3 is coming down the line and anyone whose played the first entries cannot wait!

Going for another fairly obvious choice, you cannot go wrong with the arguable godfather of zombies, George A. Romero. I could have listed half a dozen different films from the director worth checking out but these two are the best starting point and are both widely available. Night of the Living Dead is often considered the major starting point for the zombies we know and love today. While Dawn of the Dead is the sort of perfection in the genre as a whole. The 2004 Snyder remake isn’t terrible but the original stomps on it in just about every conceivable way. Night of the Living Dead is currently available for free on Netflix Instant Watch so add it to the queue right away!

The Last of Us (Video Game)

The Walking Dead games from Telltale may be amazing, but in most ways they are simply playable novels as opposed to a hardcore gaming experience. For gamers looking to play something more expansive, look no further than The Last of Us. This game isn’t just one of the best zombie games, it’s one of the best games period. The story of Joel and Ellie is exciting, sad, hopeful, tough, realistic and above all fun. The game takes a very realistic approach to the genre. You use what you can find and you need to be careful about which supplies you exhaust. Everything from the voice acting to the graphics, to the gameplay hits on all cylinders and if you haven’t had the chance to play it yet, now is the perfect time!

In the Flesh (TV Series)

The Walking Dead has spawned a fair share of imitators. Hard to blame it though given the show has been setting viewing records nearly every season. These imitations are everything from Z Nation to the new Izombie. It’s not even so much that they are imitations, so much as they are trying to jump aboard the already crowded zombie boat. Fortunately, this wave of zombie television gave us one of the best new series I’ve seen in a while. In the Flesh is sort of a reverse zombie scenario in which the outbreak occurs, and after some time of battling the zombies a cure is found and administered to turn the zombies back into their former selves. Much of the series centers on the struggles of a young man/zombie, who is trying to integrate back into life in his home town. The story can sound a bit cheesy from a description stand point but I assure you the series is anything but. It’s beautifully shot, scripted, acted and executed. Unfortunately since it flew under the radar, it only managed a two season run, but those two seasons were so good I recommend the series every chance I get. Watch it!

Last but never least is the novel/film combination of World War Z. I included both versions because they are radically different. The novel of course, is probably the superior of the two. The film is still fantastic though and keeps you on the edge of your seat. The novel takes place over a longer period of time and is collected of individual accounts from different characters accompanied by a sort of narrator. The World War Z film is more straight forward and stars the always reliable Brad Pitt. The novel is a bit hard to explain so I just say read it if you love zombie fiction. The film is best described as Brad Pitt attempting to find a cure for the horrific outbreak. The film is available in both theatrical and unrated cuts on Netflix. I’m not 100% sure how different the two are since I never watched the unrated cut but I can’t imagine then being terribly different. Add it to the queue now and then go pick up the novel ASAP!