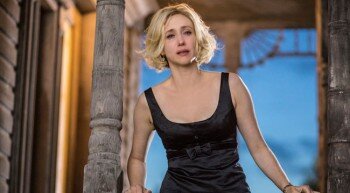 Of the four shows I review every week, Bates Motel continues to teeter on the brink of good strong drama, and downright melodrama. After last week’s bomb shell ending, where it was revealed that Norma’s brother Caleb is Dylan’s father, I wasn’t exactly sure what to think. I know the Bates family needs to be screwed up in order to get Norman where he ends up, but some of the choices are coming off as pretty ridiculous.

Then again, Bates Motel has never seemed to fully commit to greatness. It’s self aware and I give it a lot of credit for that. Being A&E’s first hit in drama is a lot to live up too and even though the show can’t compete with the likes of Breaking Bad or Mad Men. It’s definitely closer to an American Horror Story than a Hannibal these days. As the writers seem to just continue their free for all within the Psycho parameters, the show expands its reach and gets more well-paced, but also less believable and intense.

The blowback from last week’s revelation was the basis for this week’s episode. Everyone attempts to deal with the new in their own way. Norman continues his girl chasing with Cody. Norma’s new friends continue to pop up unannounced to check in on her. While I am glad new characters are being added, I really don’t know how to feel about George or Christine. Neither has had much screen time, but both seem to come with the promise of future story lines and twists. Dylan, who took the news hardest, gets black out drunk and spends most of the episode in a confused hangover.

For whatever reason, it didn’t feel like a ton happened amongst the core group of characters. One welcome return, however, came from Sheriff Romero, who continues to be the show’s resident badass. He confronts Zane in an intense one on one word battle, then finds out just how far Zane is willing to go to prove he’s serious. I won’t tell you exactly what Zane did, but he is a character that I marked for death the moment he walked on screen. Now I’m pulling for Romero to take him out.

For the most part, “Check-Out” seemed to focus more heavily on moving certain characters into position. Not much changed this episode aside from last week’s bomb drop. Since we still don’t really know if Caleb raped Norma, I’m interested in seeing how that story plays out. Norma hasn’t been the most honest person but that seems like an intense thing to lie about. Either way, Caleb will probably end up spelling trouble, and if this episode has any foresight, I think we’ll see another confrontation between Norman and Caleb again.

“Check Out” may not have been the most interesting episode, but even in its weaker moments Bates Motel manages to keep a decent standard of watchability. I still look forward to what happens next!