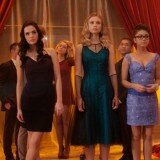 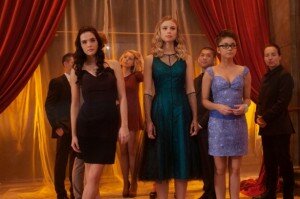 New York Comic Con 2013 is under way and, with the cast of the upcoming “Vampire Academy” movie taking the stage, fans of the popular book series got to attend a question and answer session. The lucky panel attendees also viewed some footage from the film and got a taste of the vamps in action.

Here are the highlights of the footage that was previewed for the NYCC audience:

“Blasting the “Live Fast Die Young” song, a very long sizzle reel/trailer was shown to the audience. The first scene, watching Lissa feed off of Rose. Because she was hungry, and as Rose said “what are friends for?” It established the fact that this was a girlfriends kind of vampire movie, as opposed to the “he loves her she loves him but one of them is a monster” trope this genre has been kicking around for ages. Cut to the Vampire Academy and it’s all kids kids kids. Kids laughing at each other, kids fighting with each other. Kids filming things on their cameras and smart phones. It almost stops being a vampire movie entirely for jokes. Bully Mia shows up hissing and baring her fangs, telling the other girls to leave her man alone. She later runs up to Lissa at a dance and frantically yells, “You were gone, are you pregnant, do you have herpes, maybe your baby has herpes?” Rose appears, they get into a tussle and Rose just clocks her in the face and asks, “everyone saw me try to take the high road on that.” And then to top it all off is Rose, kicking so much ass, unzipping her shirt and doing tai chi on the lawn of the school.”

So far, “Vampire Academy” looks to have a “Mean Girls” take and will be a lot more entertaining than many of us would have guessed. Between the comedy, there also seems to be more according to Daniel Waters who commented on the footage, “I know the sizzle reel seems all funny, but don’t panic if you hate comedy. It has dramatic beats and romantic beats.”

“Vampire Academy: Blood Sisters” will be out in theaters on February 14th, 2014.

Wesley Snipes Could Play Blade Again on the Big Screen

‘Girl on the Train’ Movie Expands Its Cast