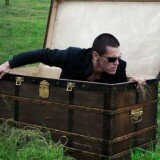 ‘OldBoy’, directed by Spike Lee, is surely coming with great anticipation. After red band trailers and posters having emerged, it is shaping up to be a thrilling movie and some of Spike Lee’s finest work. Based on a man (portrayed by Josh Brolin) who was trapped in solitary confinement for 20 years, this man is surely out for vengeance, desperate for a reason as to why he was in such horrible conditions for such a long time.

At the OldBoy panel at the New York Comic-Con today, writer for OldBoy, Mark Protsevich, discussed his reasonings for re-creating the classic movie OldBoy, and stated that since he and Spike Lee were such avid fans of the film, they wanted to re-create it to the best of their ability. Protsevich also expressed that remaking OldBoy wasn’t necessarily in hopes of making a huge amount of profit, as because of the graphical and violent nature of the film, it is unsure if it will become a grandiose Blockbuster hit.

Also in attendance were actor Michael Imperioli, who plays the best friend of Josh Brolin’s character, along with Pom Klementieff, who plays a character that was in the original, named Mr. Han. For the remake though, Mr. Han’s character is now a female, played by Pom.

As the panel continued on after showing footage from the film, Klementieff and Pom talked about what an exciting experience it was working on a film with such a well-known actor as Spike Lee. Both of them seemed eternally grateful and expressed nothing but happiness towards Lee.

If you are a fan of the original Korean film, Protsevich promises to keep a lot of the most iconic scenes in the film in hopes of creating the best adaptation possible, while still letting us know that this is a remake and not a completely new movies. Yet, some of the aspects will change, as this is an American-based movie rather than Korean, and there will be some cultural differences.

For more New York Comic-Con news, check back to All That’s Epic as we will have a weekend-long coverage!

Wesley Snipes Could Play Blade Again on the Big Screen

‘Girl on the Train’ Movie Expands Its Cast