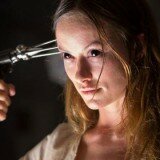 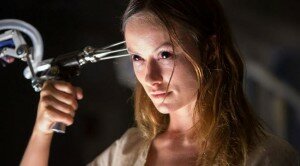 With the help of the “Lazarus” serum, a group of researchers led by Frank (Mark Duplass) and his fiancée Zoe (Olivia Wilde) have achieved the unimaginable – bringing the dead back to life. When recreating the experiment Zoe dies in a lab accident, prompting her desperate coworkers to use the serum to bring her back to life. When Zoe begins to display “unusual” abilities the team fears that by resurrecting their friend they brought about something evil.

Knowing that The Lazarus Effect was produced by the same company as Paranormal Activity and Insidious I knew what path the film was likely to take. Both Paranormal Activity and Insidious managed to build great tension through a carefully built story, making sure not to reveal too much at one time to keep the audience engaged. Once the overall threat and how to vanquish it is discovered, however, the films’ atmospheres lose their shape like a balloon sadly seeping air. Without an atmosphere, a horror movie turns away from a frightful experience into a mind-numbingly dull one with predictable scares and an even more predictable ending. Nowadays, you can walk into most any horror film and know that the ending will answer nothing, leaving a hole wide enough to drive a truck through in the hopes that revenue will allow for a sequel.

Do not be surprised if The Lazarus Effect 2 is announced in the coming months.

Now, do not get me wrong, the atmosphere in The Lazarus Effect was built up to near perfection. Director David Geld, known for the documentary Jiro Dreams of Sushi, switches filming styles throughout the movie to things fresh. Hand-held camera footage switches to an opening sequence laden with grotesque artistry that seems as though it was pulled from an episode of Hannibal. From there it settles into a sleek science fiction film with an underlying sense of horror that builds from scene to scene. Jump scares release a small bit of the tension here and there, but not enough for the audience to settle into a comfort zone. The star-studded cast from television favorites like Grey’s Anatomy, Community, and American Horror Story portray likable characters with enough depth that you are sympathetic to their plights.

What went wrong in this film was not the directing or acting, but the story itself. Though the story had a strong start it faltered and eventually fell flat on its face. Similar to Paranormal Activity and Insidious once the threat had been assessed and the characters have figured out a way to stop that threat the movie lost its shape and intrigue. What is worse is that the ending seemed as though it was copied and pasted from a stock horror film completely disconnected from the The Lazarus Effect’s style and story. This unravels the tension and terror the rest of the film worked to develop and leaves you feeling unsatisfied.

I can honestly say that I thoroughly enjoy around sixty minutes of the eighty-three minute film. Had I left one hour in I would have come out mildly terrified with a bright view of the film. However, I did not leave the theater, and saw it through to the end. I even waited through a majority of the credits to see if the crew had a change of heart and tried to redeem themselves at the last second. No such luck.