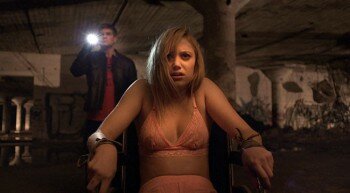 It Follows is the rare horror film that gets nearly everything right. Granted, it would have been hard to go wrong with a premise like this: a sexually transmitted curse that follows its lone victim in shape-shifting human forms with the slow, relentless gait of a Romero zombie.

It’s a thematically rich concept that works beyond its obvious AIDS metaphor. The aptly titled It Follows mines the primal fear of being followed to brilliant effect, adding on an original mythos to make the unknowable monster much more real. The monster and the various vessels it inhabits can only be seen by the infected. The curse, the characters find out, will kill the cursed eventually, unless it’s transferred via sex to another victim. If the curse kills the new victim, however, it will come back for the others, so the cursed are never quite out of the woods.

Any director worth their weight could spin a solid horror flick around such a psycho-sexualized, paranoiac nightmare, but David Robert Mitchell does his audience one better and offers more than basic horror. He takes the lessons learned from his first feature — teenage ensemble drama The Myth of the American Sleepover — and transplants them into the horror genre. Unlike most contemporary horror movies, the characters here are more than airheaded placeholders. The scenes of them palling around are more than fluff to pad out the runtime. The characters feel real, like painfully accurate embodiments of honest teenage angst, an emotion that neatly ties into the sexual nature of the threat they face.

It Follows has fantastic cinematography, capturing both the grays of decaying Detroit and the dulled pastels of its affluent suburbs with memorable camera movements that emphasize setting and paranoid tension. There’s a timeless feeling to the colors of this world and even the technology — the characters talk on corded land-line phones, but one character uses a makeup mirror e-reader. A stellar score that blends John Carpenter-esque electronic bleep-bloops with more modern noise assaults only adds to the unique atmosphere.

The film falters only rarely, falling into a few typical traps of the genre. The characters don’t always treat it with the gravity they logically should–if you know a presence is constantly stalking you, why don’t you look around every now and then? For most of the runtime, you’ll likely be on the edge of your seat, but there are moments where you’ll want to scold the characters for being so stupid. It takes away from the experience, but not much.

For all the lip service I’ve paid to the characters and the aesthetic artistry, It Follows‘s greatest asset is that it does what a horror film is supposed to do. It scares the hell out of you, and it’ll probably have you checking over your shoulder for hours after leaving the theater.