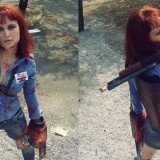 Horror Cosplay Friday: The Evil Dead’s Ash Gets Womanly in this Epic Cosplay

The Evil Dead has been a sensation since 1981, fans growing accustomed – and attached to, the horror parody. In the years since the first movie’s release, it seems that people of all types have flocked to the original trilogy, laughing or shaking their heads at the antics that Ash, the main protagonist, and his friends seemed to get themselves into. The first movie laid down the premise of the series, only for the second to show that Ash hadn’t learned his lesson and returns to a cabin he knows is bad news. While some might think repeating history is groovy, facing up against demons… again doesn’t seem all its cracked up to be.

However, if anyone can take them down it’s Ash. Throughout the series Ash is scruffy male who combats against the foes around him, but thanks to cosplayers like IreneUbik Ash’s character has been given a slight twist. No longer is he a scruffy female, but a kick ass woman who can take down enemies with her chainsaw arm – and look cute while doing it.

Get Spooky with this Hauntingly Fantastic Elvira Cosplay!

This Silent Hill Nurse Cosplay Will Both Scare and Delight

All That’s Retro Cosplay Edition: Wednesday from The Addams Family!

Black Cat has Run Out of Lives in this Spectacular Cosplay

Prepare to Get Chills: A Hair-Raising Hellraiser Cosplay
All That's Retro