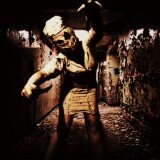 This Silent Hill Nurse Cosplay Will Both Scare and Delight

The Silent Hill franchise has been scaring fans since 1999 with nine different games, one arcade version, two movies, and various other cross-media adaptations! It has easily become one of the most well known and popular horror series. Along with game boss, Pyramid Head, Silent Hill’s best known creature is the Nurse. Making an appearance in every title related to the series with minor differences, they have become synonymous with the name Silent Hill. The Nurse symbolizes the fear of hospitalization, insanity, illness, and death for all of the series protagonists.

ElleKio’s Nurse cosplay evokes a similar sensation, and somehow still adds an air of beauty. In line with the more popular, and scarier, character design Elle executes this cosplay flawlessly. Entirely crafted by hand Elle explains the mask is made of plaster and the dress was hand sewn. She also has a video online featuring how she made the shoes, which are not pictured. The subtlety of the makeup adds to the cosplay majorly, showing off some dark veins and blood splatter. ElleKio’s cosplay will have you saying, “Helllloooo Nurse!”

Horror Cosplay Friday: This Alma Wade Cosplay Will Make You Run and Hide!

Gotta Catch ‘Em All With This Awesome Gyarados Cosplay