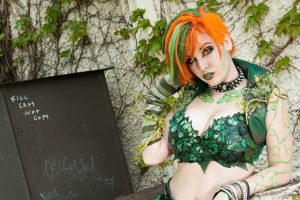 DC Comics’ Batman series, along with its spin-off comics, are filled with some of the most epic villains of any comic book franchise.  Thanks to the Dark Knight movies, villains such as The Joker and Bane have skyrocketed in popularity, but that doesn’t mean that villainesses such as Poison Ivy are any less badass.  Poison Ivy is alluring, and uses her plant friends to her advantage, creating pheromones to make her victims completely at her whim.  She is a true threat, and one of our favorite DC Comics villains.

In this epic cosplay, the incredibly talented Lisa Lou Who creates her own take on Poison Ivy and takes her usual green, leafy garb and transforms her ensemble into a more punk look.  Yet, Lisa maintains Poison Ivy’s signature look by equipping an ivy leaf-adorned top and bright orange hair.  Truly epic!