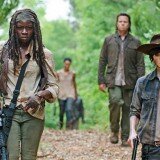 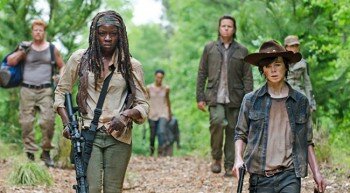 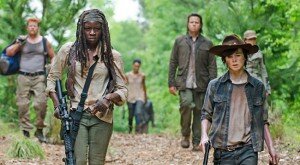 In this week’s episode of The Walking Dead, the group welcomes a controversial new member. Some of the survivors find redemption, while another ends up on the wrong side of a dinner plate. Read on for the gory details.

Season 5 of AMC’s hit zombie series kicked off its second episode with our core group reunited, minus Beth. It’s a nice change after the lonely, disconnected wanderings of season 4. Things still look grim, but there is hope and safety in numbers.

It’s a time of peacemaking in the group. Rick accepts Tara into the fold despite her previous affiliation with the Governator, and she later comes clean to Maggie about her involvement in the prison attack and in Hershel’s death. But Tara has proven herself loyal, and Maggie extends forgiveness and a hug. After all, one does need girlfriends in a zombie apocalypse.

Carol also gets her small piece of absolution. Tyreese tells her that the group will need to accept that she killed Karen, as he has. When it comes to Mikka and Lizzie, though, he tells Carol “I just need to forget it”. Separately, Rick tells Carol that he owes her everything for saving them from Terminus, and he wants to reunite the group. “Will you have us?” he asks. She nods.

Something or someone is watching the group. Is it Morgan? The Termites?

On the road again, the group comes across a priest, Father Gabriel Stokes (Seth Gilliam), who they rescue from a horde of hungry walkers. Despite their skepticism at his lack of survival skills and his weird jokes, they follow him back to his empty church. A small group, Gabriel included, heads to the local food bank for a supply run. Of course, they must brave a flooded pit of seriously moldy walkers to reach the sorely needed provisions. Gabriel gets cornered and must be rescued by Rick and Michonne. In the confusion, Bob is attacked and narrowly escapes. More on that later.

Back at the church, Carl shows Rick what he has found. Scratch marks on the outside of the church show that someone – or many someones – were trying to get in. Carved into the wall is the ominous phrase: YOU’LL BURN FOR THIS. Gabriel is hiding a secret, and not the good kind.

Abraham convinces the group to head to D.C. in search of a cure. There is a toast with communion wine, and all is well. The warm and fuzzy candlelit moment doesn’t last long, however. Rick tells Gabriel that he knows he’s hiding something, and Rick will kill him if any harm comes to the group. Outside the church, Carol and Daryl spot the car that kidnapped Beth and drive off in hot pursuit. Bob is alone outside, crying for unknown reasons – did he just realize he was scratched or bitten by a walker? As we’re pondering this possibility, Bob gets knocked out by Gareth and his cannibal cohorts.

Bob wakes up tied to a stake. Gabriel gives him the “it’s nothing personal” speech before revealing they’re eating, well, Bob’s leg! And it’s tasty, too! Talk about a foot long. Oh, the neverending puns this scenario inspires. So the question now is: was the leg infected by a walker bite? If so, can Bob still live without his leg (hey, it wouldn’t be the first time)?

Here’s hoping the group can manage to stay intact for another week. Between Carol, Daryl and Bob disappearing, keeping these survivors together is like herding cats.