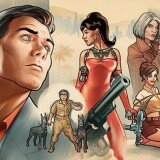 The FX comedy Archer has a special treat planned for this year’s Comic-Con – a live performance aboard the Inspiration Hornblower yacht in San Diego. The cast will also participate in a panel Q&A as part of FX’s Comic-Con programming.

Archer Live! will bring the entire cast together for a live performance of an episode. The event will give a few lucky fans the chance to mingle with stars and win prizes.

“The event kicks off with a deep dive into the universe of the beloved, Emmy-nominated animated spy/P.I. comedy Archer with an exciting live performance featuring the entire cast,” according to the official press release. “Fans will enjoy live entertainment, food, drinks, giveaways, a photo booth and lounge while docked at the marina.

Series synopsis:
“Archer is an animated, half-hour comedy that revolves around a former spy agency turned private investigation firm and the lives of its employees. The Figgis Agency presents all new challenges for the former spies, the most difficult of which might be the move to Los Angeles. Every seedy surveillance of a suspected adulterer or investigation into insurance fraud is actually just another excuse for the staff to undermine, sabotage and betray each other for personal gain.”

UPDATE: Tickets for the 21 and over event are, unfortunately, sold out.