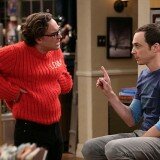 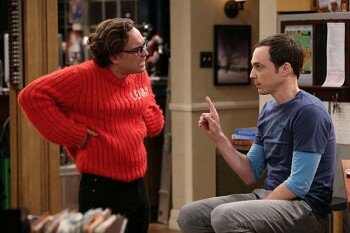 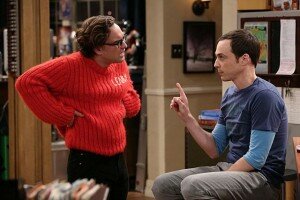 This was yet another fine week of television episodes as American Horror Story Coven, How I Met Your Mother and now The Big Bang Theory, all came through with standout episodes. The Big Bang Theory particularly has a lot to live up to year after year. It doesn’t have the luxury of being a 1 season story arc like AHS Coven, and it doesn’t have the implied end game of a show like How I Met Your Mother. The Big Bang Theory is in free reign for the most part as it attempts to stay fresh with the same set of characters we’ve grown to love these last 7 years.

“The Itchy Brain Simulation” did a whole lot right and very little wrong. In fact, the main story line between Sheldon and Leonard was definitely a season highlight so far. The basic premise for this episode is that Leonard discovers a DVD that he and Sheldon failed to return some seven years ago. Before telling Sheldon about his discovery, he makes Sheldon promise not to get upset, something that is of course against Sheldon’s true nature. When Leonard tells Sheldon of the DVD, instead of freaking out, Sheldon makes a deal with Leonard that until the fine for the DVD is resolved, Leonard must wear an ugly, itchy, skin burning sweater with nothing underneath.

This premise reminds somewhat of the halloween episode, in which the gang exchange pranks with one another. Sheldon, who is normally spiteful and obnoxious throughout the episodes is actually the reasonable one here, while Leonard ends up being the annoying one, constantly complaining about the issues at hand. If you are like me, you will wonder how Sheldon is instantly able to remain calm, when everything we have ever seen points to him freaking out. There is a sensational reveal at the end of the episode that ties it all together and had me laughing for a solid minute straight. Even as I figured out the punchline at the end of the episode, the grand picture of Sheldon and Leonard switching roles was complete, and this was a story I’m surprised they hadn’t tried earlier on.

Off to the side we also got an interesting subplot involving Raj, Penny and the return of Lucy. Penny wants to stick up for Raj but ends up coming off as completely nosy and irresponsible. When Lucy wants to see Raj, things take a fun turn and we are left to wonder what will become of Raj and Lucy in the future. When he goes on a date with an Indian girl, due to Penny’s racism, we really get the first glimpse of just how bad Raj can be at speaking to women. Now that he can speak to women without alcohol it opens up some major possibilities for Raj’s character. At the same time, however, we get our first examination of the fact that, just because he can talk to women, doesn’t mean he can talk to women. This is surely going to come up in future episodes, and since Raj is a favorite of mine, I look forward to it.

As I said earlier, this was an intriguing premise that managed to feel fresh in a show always attempting not to spoil. The Big Bang Theory still rakes in millions of viewers every single week so for the time being it’s safe to assume the show will continue on for at least a couple more seasons. Thankfully, even though The Big Bang Theory may not be as original as it once was, at least it’s maintaining a level of entertainment and character insight that keeps fans coming back year after year!

Over the last few episodes of Wayward Pines, we’ve begun[more]

"Aperitivo" cleared up unanswered questions and set the players in[more]