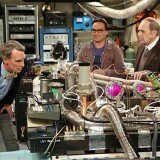 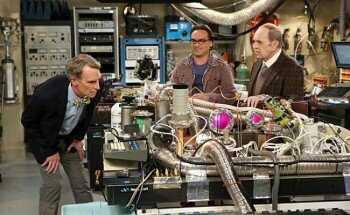 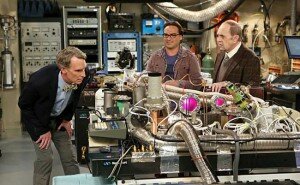 This has been a fine week for television. Both of the shows I review earlier in the week had strong episodes (AHS Coven, How I Met Your Mother), not to mention shows I don’t review, (The League, It’s Always Sunny), and now The Big Bang Theory continues the streak with another strong episode centered on the return of a fantastic guest star, and the inclusion of an awesome, long overdue, guest star. Along the way we also got to see two relationships take center stage, one obvious, and one that I’ve missed a bit.

Some people criticize The Big Bang Theory for “changing” the humor of the years. This is sort of true but personally I think much of the comedy is still very similar. I also think that if we had never gotten the inclusion of the more female characters that this show would have gotten boring. How long can you really stretch four nerds making comic book references? My friends do that, so I get enough of it outside of television. At the core, the show retains these great insights into nerd culture but the show has added a great relationship dynamic that I think pushes the show to greater heights.

“The Proton Displacement” featured the return of hilarious guest star Bob Newhart as Dr. Arthur Jefferies, a.k.a Professor Proton. After running into him at the pharmacy during Sheldon’s “restock the medicine cabinet day”, Professor Proton sends Leonard a paper to get his opinions on it. This, of course, lights the jealousy fire inside of Sheldon who doesn’t realize just how abrasive he can be. Amy brings this to the forefront when she basically calls Sheldon annoying, an insult that Sheldon takes very personal, but also reinforces as he reacts. We also got a great guest appearance from Bill Nye the Science Guy, someone I’m surprised has never been on the show before. Sheldon recruits Bill Nye to make Professor Proton jealous and the two T.V scientists have some humorous banter. The end of the episode was a nice step forward for Sheldon in his constant quest to understand human interaction, something that has been a core theme for many seasons now.

On the backside of the episode, we explore the often love hate relationship between Raj and Howard, two characters on the show who actually have a tremendous bond. Some people chalk it up to underlying sexual feelings, but to me it has always been a simple bromance. As Raj attends girl’s night with Penny, Amy and Bernadette, Howard ends up crashing in on the party and taking away some attention from Raj. Since Raj can now talk to women without drinking alcohol, he finds these girls nights sacred in order to express his feelings. Raj does make a good point here about certain things guys just find easier to tell women. At the same time, though, I think Raj does understand that the girl’s night sort of leaves Howard high and dry with nothing to do and no one to hang out. The ending line of their confrontation comes from Amy, and it’s one of the best lines in the episode.

Everything considered, this has been a strong season for The Big Bang Theory as we get deeper into the obvious and not so obvious relationships amongst the beloved gang of misfits. So far, there has been little in the way of overarching stories, but hopefully a few things will come back up later on in the season, such as Sheldon’s big discovery and Raj’s being able to speak to women. Looking forward to next week’s episode!

Over the last few episodes of Wayward Pines, we’ve begun[more]

"Aperitivo" cleared up unanswered questions and set the players in[more]