Finish Him! A Sexy Jade Cosplay That Will Fatality Your Heart

MORTAL KOMBAT, two words that generally invokes an instant sing-along, and judo chopping of the air. Despite how docile a person might be in their every day life, there’s something about Mortal Kombat that suddenly brings out the inner fighter in us all. The tail end of 1992 was when Mortal Kombat was introduced to the world, it originating as an arcade game. Since, the title has come a long way – being brought to homes through console versions of multiple titles and being developed into movies. Whether a gamer’s focus is on first person shooters, action adventure, or platformer titles most out there know of the legacy that is Mortal Kombat. And how could they not? With unique fighters – such as Scorpion, Raiden, and Cyrax, and brutal finishing moves called fatalities, chalk full of gore.

The characters that players can choose from has become quite the diverse group, sprinklings of multiple men and women throughout the roster. One of the title’s most popular female fighters is Jade. Originally, Jade derived from a swap out outfit change for Kitana – allowing for her to don the green look instead of her traditional blue, back in 1993 as a secret and unplayable character. Soon there after, especially after the woman got high praises from fans, Jade developed into her own entity back in 1995. Since, Jade has made appearances in more than a handful of Mortal Kombat associated things – merchandise, movies, and other game titles. 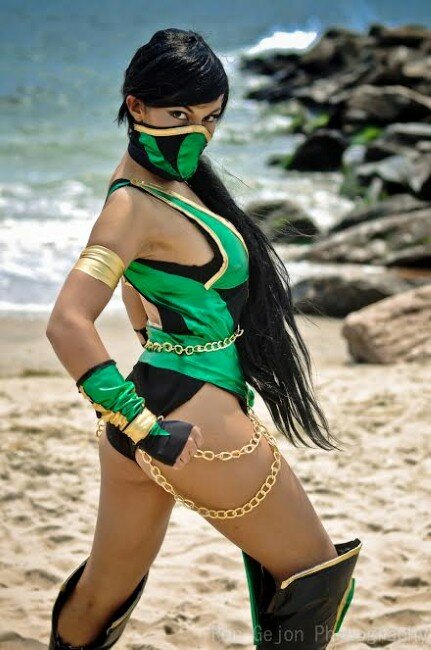 Jade, who most certainly does not lack in sex appeal, is a woman of many talents. Her fighting skills take her to a level in which most cannot reach, being versed in fans, the Bo Staff, and boomerang. Not everyone can make an opponent fall to his or her knees by way of staff, boomerang, or fan. Of course, that’s what makes Jade, Jade, and without such abilities the fighter wouldn’t have caused such an uproar within the Mortal Kombat fanbase. With her sex appeal, paired with amazing fighting skills, it doesn’t take a genius to assume that women would start to cosplay Jade. Soni Aralynn is one of those girls, and her take on Jade is spot on. From the amounts of skin showing, to the accuracy of the outfit, Soni has done a great job bringing Jade to life.

Most Epic Cosplays of the Week: Tyrande Whisperwind Mesmerizes Fans

Be Wary of this Street Fighter’s Poison Kiss

Cosplay on the Cheap: Crafting an Epic Wonder Woman Tiara

Welcome to All That's Cosplay's 'Cosplay on the Cheap' DIY feature, where we will show you how t[...]

Time to take a look at this bodacious Brit’s style and honor one of the most iconic gamer girls [...]

It’s time to get your daily dose of post-apocalyptic style from The Walking Dead’s resident love[...]

Katherine Pierce is a seductively dangerous vampire with a tendency to break hearts. She is impu[...]