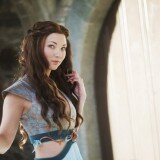 A Margaery Tyrell Cosplay Fit for a Future Queen

Game of Thrones is all the rage right now, and even though George R.R. Martins novels from which the TV show was derived have been around since 1996, you cannot open a social media outlet without seeing something about the show. It’s true to origin story and phenomenal acting bring together both old and new fans. Not to mention the cast looks stunning.

Perhaps the fairest of them all is Margaery Tyrell. However, don’t let her pretty face fool you, she is just as clever as she is beautiful. Her prowess lies in manipulating people, not necessarily in a sadistic way, while keeping their trust and understanding. She’s also kind and generous, her charity work managed to make the kingdoms subjects look slightly favorably towards King Joffrey, and that’s saying something.

Norwegian cosplayer Trine Ericzon looks absolutely ethereal as Margaery. It’s almost difficult to tell if it’s a cosplay or the real deal. She has also embodied Margaery before in other amazing costumes. Go take a look, you won’t be sorry.

Get Spooky with this Hauntingly Fantastic Elvira Cosplay!

An Out Of This World Orion Slave Girl Cosplay!

Horror Cosplay Friday: A Female Hannibal Cosplay That Will Send Chills Down Your Spine
All That's Retro