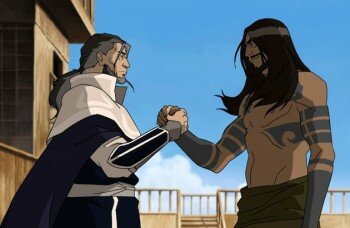 The first episode of The Legend of Korra may not have been the “Breath of Fresh Air”, its title implied, but it was still a strong start to what I’m hoping will be another winning season for the show. The second episode premiered right after the first, and apparently a third episode has already been released that I haven’t had the chance to watch yet. As I mentioned before, LoK isn’t in my normal ballpark for reviewing so forgive me as I continue to adjust to the setting.

“Rebirth” picks up basically right where “Breath of Fresh Air” left off. Many people all over the world have been blessed with the new ability to Air Bend. Korra, and especially Tenzin, intend on seeking out and recruiting some of these newcomers to help rebuild the Air Nation,  a nation that has dwindled down to just 5 air benders in the world. Tenzin is adamant about rebuilding the once great Air Nation. Unfortunately, most of the new air benders don’t seem all that interested in walking away from their lives to start anew in the Northern Air Temples. Can you really blame them? After a series of failures to recruit newcomers, Tenzin decides to let Korra have a go of things. Her results aren’t a whole lot better, but it does lead to an incredibly funny and off beat encounter with a young 20-something year old living in his mothers basement.

Since that particular scene lasted longer than any of the other recruiting scenes, I assume we haven’t seen the last of this slacker. Korra is persistent, and something about the way this character challenged Korra’s ideals of duty seemed to strike a nerve in her. Why does The Avatar have to do what they do? No one is truly forcing her, and it’s not like anyone could actually stop her should she choose to abandon her post and live in solitude. It seems like the truth of Korra is that she is following the path laid out before her, even if she isn’t always content with the role, or the outcomes. What makes Korra such an interesting protagonist is that she still struggles with the concept of Why? After all, deep down, she is still a young woman, and being the savior of the world is not as easy as one might think it is.

Of course, the real challenge for Korra this season has yet to come her way. As our new villain works to free his cohorts – an earthbender named Ghazan and an armless waterbender named Ming-Hua, from their respective prisons – a master plan appears to be at work with an end game of killing the Avatar. Apparently, they have one more accomplice to bust of prison before they put whatever this master plan is into effect. I assume we will learn more about it in the next episode, but until then I don’t want to count my chickens early.

Towards the end of the episode, two major occurrences happen. The first is that, through a comical and fun demonstration, Korra and the gang manage to recruit a young airbender named Kai,  though Kai is not the helpless child he appears to be at first. I won’t spoil the little twists and turns of the episode. However, I do need to bring up what was probably my favorite part of the episode. If you are weary of spoilers stop reading now.

I assume most people who saw the episode know what I am about to reveal, and I must admit I was not expecting this character to return at all. Luckily, the writers probably recognized him as a fan favorite and worked him back into the plot line. I am speaking of none other than Prince Zuko. The very end of the episode showed an aged but still spirited Zuko leaving to the North Pole where Zaheer’s final cohort is imprisoned. Most people who watch The Last Airbender should be excited by this addition. I know I was.

Once again, I am left impressed with the amount of story LoK is able to squeeze into a tiny 20 minute time frame. The new character additions are welcome. The new villains are obviously powerful and dangerous benders. And, best of all, this has only been in the first two episodes. LoK has certainly come back in full force, and I cannot wait to see how this season progresses and where it will end, setting us up for the fourth and final season of the show.

The Legend of Korra “Long Live the Queen” Review

The Legend of Korra Book 3, Episode 9 Review: “The Stakeout”

The Legend of Korra Book 3, Episode 8 Review: “The Terror Within”

The Strain Episode 8 Review “Creatures of the Night”

I've got to hand it to The Strain. The comic[more]

Are these moments of base fan service really worth slogging[more]