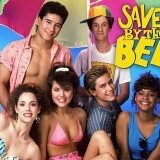 Tiffani Thiessen showed up in television shows that no one ever expected such as “Married with Children”, “Step-by-Step”, and “Blossom” all while she was appearing as Kelly in “Saved by the Bell”. She also starred in “Son in Law” alongside Pauly Shore in 1993. What is the lovely Tiffani up to these days? She provides voice talent for the popular kids show “Jake and the Never Land Pirates” as Misty the Wonderful Witch and also in “White Collar” as Elizabeth Burke. She also owns Tit 4 Tat Productions and has a daughter named Harper with husband Brady Smith.