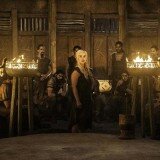 Game of Thrones S6E4 “Book of the Stranger” Review 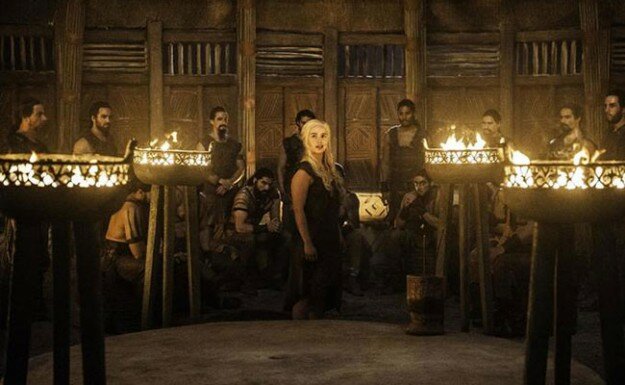 WHEN YOU SPOIL THE GAME OF THRONES YOU DIE!

Things are heating up!

Dolorous Edd tries to convince Jon to stay with the Night’s Watch, reminding him of his vows. Did anybody ever think about if resurrection would release a brother of the Night’s Watch from their vows? Probably not. The White Walkers are still a threat that’s for sure.

But then something else happens. Something that fans have been hoping for since the very first season, a Stark reunion. Notice how Sansa is the first face we see in the shot when the gates open, nice touch. How much these two have grown since Sansa and Jon last saw each other. How much they have seen and done. They can hardly believe it either. Might just be the happiest moment in the show in a long time.

Sansa and Jon slip right back into being brother and sister, reminiscing about Winterfell, wishing they could go back, leveling with each other about how they acted. Sansa is set on reclaiming Winterfell from the Boltons. It’s so good to see her confidently trying to set the course and offer her own reasoning. Jon is, understandably, pretty weary of fighting. That’s all he’s done since he left Winterfell. Having to hang the men who murdered him, his own brothers, still has him shaken. Sansa is right though. They will never be safe so long as the Boltons rule the North. Sansa is determined to retake Winterfell with our without Jon’s help. Bartender! Another episode of fierce Sansa, please!

Davos is still hoping for answers about what happened when Stannis attacked Winterfell. Brienne was there, after all. Stannis admitted to her that he assassinated Renly Baratheon with blood magic, before Brienne executed him. WHOAH, Brienne, this is some serious bad blood you could be sewing here. Who knows how these two will get along now? It still hasn’t come out that Melisandre burned Shireen at the stake, sacrificing her only to have Stannis bite it.

A Bolton messenger arrives while this weird crew are all at a meal. Look at this crew! Jon Snow, Tormund, Edd, Sansa, Brienne and Pordrick?! It’s amazing. I’m totally shipping Tormund and Brienne. I called these dark words. Ramsay lets the traitor bastard Jon Snow know that he has his brother Rickon hostage. He demands that Jon return Sansa to Winterfell or he’ll flay the wildlings, rape Sansa and feed Rickon to his hounds. Sansa will not have this. With the Free Folk, at least, they will take back their brother and their home.

At least Robin Arryn can fire an arrow now. Littlefinger is back at the Vale. Lord Royce has heard that Lady Sansa was married to Ramsay Bolton and is none too pleased. It’s clear that Littlefinger has Robin in his pocket, but he’s also apparently ready to put the knights of the Vale in the field. Supposedly he’s going to ensure Sansa’s safety, but who knows who he’ll actually throw his weight behind this time. Slime ball.

Envoys of the Good Masters of Astapor and the Wise Masters of Yunkai are sailing into Meereen. Tyrion is preparing to work his diplomatic magic on them, but Grey Worm and Missandei are skeptical. Their years of slavery and experiences so far in Daenerys’s service aren’t making them optimistic about “negotiating” with slavers.

The negotiations begin with spats, but Tyrion plays on their greed. Conceding that Daenerys’s radical dismantling of slavery has upset them, he proposes that they abolish slavery over seven years’ time. And that they will cut off their support for the Sons of the Harpy in the meantime. With parting gifts of lovely ladies for each envoy, he says, “Give freedom a chance, see if it doesn’t taste every bit as good as what came before.”

Now Tyrion has to deal with an even more hostile crowd. The free people of Meereen are incredulous that a foreign dwarf has invited the Masters to the city to make peace with them. They do not trust Tyrion.  They want to hear what Grey Worm and Missandei have to say. For now, in front of the people, they back Tyrion up.

But once they are alone again, they raise their doubts. They are loyal to the Queen’s abolitionist mission, not to Tyrion’s placating approach. It’s really hard to tell just yet who might be right. Without Daenerys or her dragons to kowtow the Masters, stroking their backs may be the only way. Or they may just turn their backs on this arrangement anyway. One thing for sure is that Daenerys’s servants can’t be divided like this.

The High Sparrow decides to have a heart to heart with Margaery. It’s another supercilious tale of how he came to be a godly man, but we do learn quite a lot about his past life. Apparently he made shoes and took a shot at joining the 1% of Westeros. Eventually he spins the tale back to Margaery and the extravagant life she’s led. To the High Sparrow at least, she’s polite enough. He lets her visit Loras at last.

He’s not doing well. He’s lost all sense of the good of himself or House Tyrell, he wants this crap to be over. He’s probably been getting the worst treatment, being a buggerer and all. Margaery doesn’t know what to say to him. She’s clearly still playing this situation.

Maester Pycelle is counseling Tommen, in his vague rambling, way. Cersei wants to have her son’s confidence again, having been kicked out of the Small Council. Tommen seems to have only gotten more afraid of the High Sparrow and more concerned for Margaery. He confesses that he’s been to talk with the High Sparrow and learned that they plan to make Margaery undergo a walk of atonement, just like Cersei did.

Armed with this knowledge, Cersei barges in on Olenna and Kevan again. Whether the High Sparrow knew that the Lannisters and the Tyrells would bicker amongst themselves after he imprisoned Cersei and Margaery, who can say, but they did do just that. (But of course he had plenty of help from Cersei until he turned the tables on her.) Olenna will not let Margaery by paraded naked in the street. To Olenna’s surprise no doubt, Cersei agrees.

Jaime proposes that the Tyrell army march into the Sept, free Margaery and Loras and arrest(kill) the High Sparrow. It will be quick, before Tommen can order any armistice. Kevan is worried that the fallout will bring chaos to King’s Landing. “Better them than us,” Olenna offers. Working with Olenna is pretty big of Cersei. If she doesn’t take advantage of this situation and do something like have Ser Strong kill Margaery when he gets the chance, I’ll be very impressed.

But this will not go smoothly anyway. Something will happen where Tommen will not be pleased with the outcome. If Tommen finds out that his mother went behind his back with a plan he didn’t approve of, undermined his authority, Cersei could get Margaery back but lose Tommen. And kick herself forever in the butt for that.

Theon makes his unceremonious return to Pyke, where Yara is now holding the castle. She’s royally pissed that Theon didn’t come with her when she first tried to rescue him from the Boltons in Season 4, and has no patience for Theon’s tears. He does say he’ll help her win the Kingsmoot and become ruler of the Iron Islands. We’ll see how much respect the Ironborn will have for Yara and Theon after all that’s happened and Euron has returned.

Ramsay always has a knife ready. I knew that Game of Thrones would never have let Osha off Ramsay this soon, but I was hoping Osha would at least entertain him enough to survive the day. But he really had been intending to kill her all along. He had tortured out of Theon that Osha was the one who successfully sprung the Stark boys from Winterfell back in Season 2. Ramsay was not going to risk that happening again.

Dammit. Why does this season have to kill off so many interesting returning characters so soon? Doran, Roose, Balon, Osha? WHY?!

Jorah and Daario have made it to the outskirts of Vaes Dothrak and have deduced that the Dothraki will have taken Daenerys to the Temple of the Dosh Khaleen. They have no chance of fighting through the city to her, so they try to go in as inconspicuous merchants without weapons. In the disarming, Daario gets a glance at Jorah’s growing Greyscale. Would explain why he seems weak and out of breath. Daario can’t let go of his lovely ornate woman-hilted knife.

Jorah, weary from travel and his affliction gets whipped around pretty badly by the blood rider who catches him. Lucky Daario kept his special knife after all.

Daenerys is actually starting to look comfortable among the Dosh Khaleen. They all have their own brutal stories. The Priestess hopes the Khals will decide to let her stay, let her join the wise council of khal widows. For now Daenerys wants some air, away from the old stinky women. Another of the younger Dosh Khaleen accompanies her. She’s curious about Daenerys’s dragons.

SURPRISE DAARIO! Time to skip this scene? No. Daenerys has a better idea.

The great Khals debate what to do with Khal Drogo’s widow. Pass her around? Sell her out to Slavers Bay? Daenerys has an idea. She was pronounced the mother of the Stallion Who Mounts the World. She would lead the Dothraki to Conquer Westeros instead of the Khals bickering over petty raids and horse wives.

Khal Moro laughs at her. Drogo is dead, their child is dead, and they will let the whole Khalasar take turns raping her, including their horses. But Daenerys wouldn’t look so smug without a guaranteed trump card up her sleeve. If they won’t follow her, they will burn.

She lays her hands on the rims of the torch columns and knocks them over, one by one. Soon the whole great tent is engulfed in flames. The Khals scamper to the doors but they are bolted shut thanks to Jorah and Daario. Daenerys watches as the flames swirl around her, consuming the Khals trapped inside. Soon the doors fall off their burning hinges, and for the second time in the series, Daenerys emerges from the fire, unburnt, naked and awe-inspiring. The thousands of Dothraki gathered around the burning temple kneel at the sight of her. Jorah is seeing this awesome power for the second time. But this is the first time Daario sees just how magical a Targaryen Daenerys really is.

That’s one way to win over a people. With all the Dothraki at her back Daenerys could go anywhere. We’ll see where she decides to go first and how she’ll lead the Dothraki once again. Major steps for our major protagonists all around! Onward to victory!