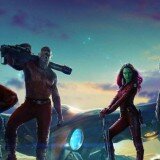 New Guardians of the Galaxy Stills Show off World and Characters 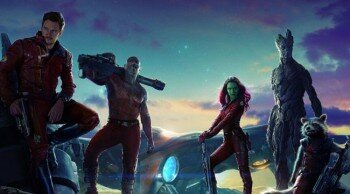 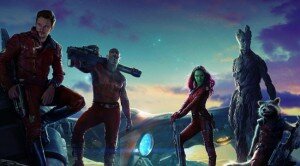 Five new photos from Marvel.com, showcased on CBM, give us a pretty comprehensive look at the world of Marvel’s upcoming blockbuster interstellar romp, Guardians of the Galaxy.

Two of the pics feature most of the five man team of the Guardians, huddled together, both coincidentally with Peter Quill looking around in exacerbation.

Another has Peter in his Star Lord mask while kneels in the face of a sand storm, it looks like. Another has Djimon Hounsou making his now familiar bemused expressing, presumably when he doesn’t recognize Peter’s Alias.

The fifth still has director James Gunn kinda blending in with the drab, causal outfits of the costumed actors, perhaps except for the fact that he’s bespectacled and motioning to Yondu and his gang in a directorial manner.

As July rolls along, and August approaches, it feels like that unless there’s a launch trailer for Guardians, anything short of that isn’t really going to get Marvel fans and the general movie-going public any more psyched for this movie than they are already. But in the meantime, check out these gorgeous behind the scenes stills from Marvel’s Guardians of the Galaxy, arriving in theaters August 1st.

Guardians of the Galaxy james-gunn Star-Lord

“Inside Out” Gets a Spectrum of Emotional Character Posters