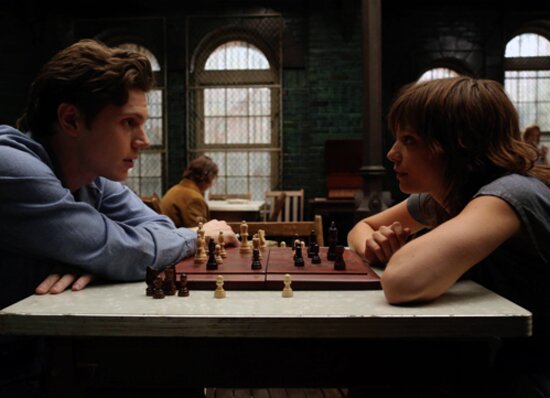 Whenever you can squeeze an exorcism, a nun bondage fetish, and electric shock therapy into a single episode, you know you’re in for a treat. Such was the case with Season 2: Episode 2 of  ”American Horror Story: Asylum,” aptly named “Tricks and Treats.”

The episode starts with new bride Theresa (Jenna Dewan) frantically trying to drag the now one-armed Leo (Adam Levine) to safety, while at the same time being chased by Bloody Face. Even with one less limb, Leo is too heavy for Theresa. She hides in a closet, and we see Bloody Face stab a few more holes in her hubby for good measure.

Similar to last week, the action jumps back in time to 1964. We’re at the home of Wendy, Lana’s girlfriend. As you’ll recall, last week Wendy had Lana committed to the asylum after Sister Jude blackmailed her. Scared by a group of trick-or-treaters at her door, Wendy bursts into tears, feeling guilty and despondent about what she has done to her lover. She takes a shower to relax and, in the ultimate kharmic payback, is stabbed to death by Bloody Face.

Meanwhile, back at the ranch, reporter-turned-inmate Lana is caught keeping notes in a hidden diary. She mouths off to Sister Jude, telling her “I have an excellent memory.” Jude asks Dr. Arden to work his electric shock therapy magic to “erase the memories that are tormenting her.” Basically, they want to shock the gay out of her. Dr. Arden is only too happy to oblige and, as Jude holds the high-voltage headset to Lana’s skull, we see a fleeting hint of humanity on Jude’s face. (As a side note, Sarah Paulson plays a very convincing electric shock recipient).

Zachary Quinto is back as Dr. Oliver Thredson, a psychiatrist who has been sent to Briarcliff to evaluate Kit’s(Evan Peters) sanity. Kit gives his alien abduction story another try, insisting he isn’t crazy and didn’t murder anyone. He takes it a step further by telling Thredson that the body they found sliced up wasn’t his wife at all. “After they took her, she was alive,” he said. “The men from outer space?” asks the doctor. Later, we see Dr. Thredson typing his diagnosis of Kit as “acute clinical insanity.”

The virginal Sister Mary Eunice strolls through the forest, carrying a wicker basket. Dr. Arden slinks up on her and they have a creepy chat. It seems that Mary Eunice has been leaving a basket of something for some unknown creature, and it’s a secret between the two of them. Arden gives her a fancy can with a candy apple inside. “Go ahead, have a bite,” he tempts her.  She takes an awkward bite of the apple, and smiles with pleasure. These two seem to really like each other. This whole scene is like a naughty fairy tale in the woods, so we can probably assume that the apple is poisonous, either literally or symbolically. We don’t find out what she is leaving out there in the basket, or for whom.

A distraught couple talks to Jude about their disturbed son, Jed. Dad says that their normally sweet son ripped open their prized cow with his bare hands and ate its heart before bathing in its blood. Teenagers.

Shelley (Chloe Sevigny) approaches Dr. Arden, and tells him that she saw him flirting with “our lady of perpetual virginity.” She seems pretty turned on, and offer him sexual favors in exchange for a trip outside the institutional walls. The doctor calls her a slut. We get more backstory on Shelley, as shares her story of how she was committed for simply being a nymphomaniac.

It’s exorcism time! Monsignor Howard (Joseph Fiennes) and an exorcist in fancy robes have the aforementioned possessed teen, Jed, tied to the bed.  Jed/The Devil is speaking either in tongues, in Latin, or a combination of both. He sends the exorcist flying against the wall with a simple wave of his possessed hand. The throwdown between the clergymen and demon-possessed Jed goes on for awhile. Jed ends up near death, and Jude is told to keep an eye on him while they bring in someone for last rites. The Devil seems to have all the dirt on Jude’s past, and calls her out as a whore and a murderer. We see flashbacks of a younger, less frigid Jude, dancing and drinking at a nightclub. On her drive home, just as The Devil said, Jude plows into a girl in a blue dress in her car and keeps driving. When the Monsignor comes back, The Devil tells him “It’s you she thinks about when she touches herself at night.” Jed’s body goes lifeless as some sort of energy or being flies out of him and knocks Mary Eunice to the ground.

There is a power failure and all the cell doors fly open. Lana and her new friend Grace run to escape (Lana previously told her about an underground tunnel), but when Kit catches up Lana yells for the guards. “Screw you, Judas bitch,” snaps Grace. Jude rewards Lana by letting her choose canes to spank them with.

Dr. Arden visits Sister Mary Eunice in the infirmary. He apologizes for waking her. “You could never frighten me, doctor,” she says. Has Jed’s demon has now taken over the body of Mary Eunice? We’ll have to wait and see.

Fans of the first season of “American Horror Story” may still be experiencing some separation anxiety from the Harmon family and all of their other favorite characters from last season. The first season, which focused mainly on the family, their neighbors, and their haunted mansion had far fewer moving parts. There was also a tad more dark humor to balance out the gloom and doom.

There is, however, much to like about Asylum in it’s own right. The setting of Briarcliff is rich with disturbing story possibilities, and the characters are, so far, very interesting and unexpected. The new cast members are all stellar, especially James Cromwell as the sadistic Dr. Arden and Chloe Sevigny as the persecuted nympho, Shelley. “Asylum” has already taken the fear factor up a few notches, and it can only get more disturbing as the season ramps up. With more characters to keep track of, I don’t feel very invested in any of them yet, but that should change as I get to know them better.

‘The Walking Dead’ Season 3, Episode 4: ‘Killer Within’ Preview and Spoilers

The Walking Dead Season 3: Episode 3 ‘Walk With Me’ Review

The Walking Dead Season 3 Episode 3 “Walk With Me” Preview