English voice overs are grating, multiplayer only in combat.

When one thinks of a fantasy role-playing game they generally don’t link video games with classical music composers. Eternal Sonata does just that in a unique, magical blend of the arts. Based on the final moments of classic composer Frederic Chopin, this title explores the mind of a departing soul and offers a thoughtful look into reality and escapism. Combined with a masterful score and charming characters this formula makes for a pleasant, moving experience. 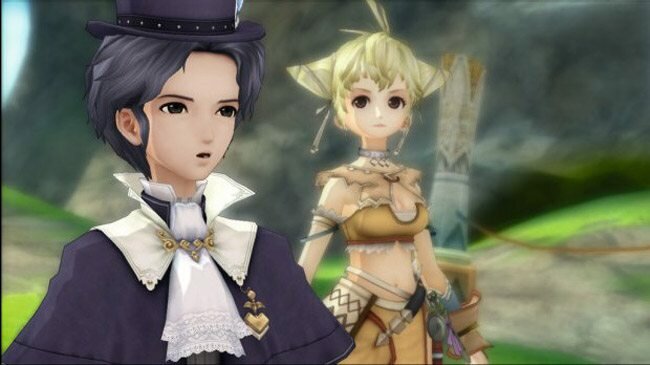 When one thinks of a fantasy role-playing game they generally don’t link video games with classical music composers. Eternal Sonata does just that in a unique, magical blend of the arts. Based on the final moments of classic composer Frederic Chopin, this title explores the mind of a departing soul and offers a thoughtful look into reality and escapism. Combined with a masterful score and charming characters this formula makes for a pleasant, moving experience.

Chopin is on his death bed. His life is nearing its end and he has fallen into a deep sleep while his loved ones gather around. The game’s story takes place in his dream, where he has created a rich and colorful world where life flows abundantly. The sub-story of this world is introduced when Frederic meets one of his created characters personally. It is learned that the Count of the nation Forte is playing out a scheme to achieve his own ends. The party of unlikely heroes takes to the beautifully serene world to put an end to his evil plans. At the beginning of each chapter the player is given a brief explanation of a specific time or event in Chopin’s life, as well as introducing one of his musical scores as an overall theme for the chapter. It is a beautifully executed concept that serves its purpose in that it provides an informative lesson while still maintaining an entertaining fantasy world.

The real-life sections of the story are always interesting to watch despite basically being history lessons, but the in-game events have less to offer. Most of the story-related scenes are simple dialogues between characters with very little movement actually going on. It’s a strange contrast to have the informational section be entertaining and the in-game scenes be skipped. Overall, the game does a great job in reciting its story but could use a little help in the presentation department.

Eternal Sonata is a classic RPG style game with its own unique combat system. As the characters gain experience and level up, they will become stronger and learn new moves along the way. A standard system for any role-playing game, but where the gameplay really shines is in combat. A light and dark system is used not only to determine which skills will be used by your characters, but what augments the enemies will have. Whether each character is standing in the light or dark areas of the arena will modify which skill can be used on top of normal attacks. Some characters may be able to heal in the light while the darkness will give them an area of effect attack. This allows the player to strategize their play keeping all of their characters’ abilities and placement in mind. Enemies will often change in the dark as opposed to their standard form in the light, making them more difficult or giving them new abilities. Players must also keep i n mind the direction their character is facing and must react quickly to incoming attacks, as each character will be able to guard incoming attacks with a properly timed button press. Enemies will also be able to guard, but will be less likely to block if attacked from behind.

While this may seem lot of information to keep in mind while fighting, it becomes second nature while playing and makes for a fantastic battle system that serves to immerse the player in the action. Much of the game outside of combat is spend exploring maze-like areas for treasure and searching for the way forward, usually through solving a variety of puzzles. The overworld is mainly static with NPC’s spread out throughout towns and fields providing small side quests from time to time. There are 12 playable characters in the Playstation 3 version, giving the player many different possible combinations that will alter the gameplay style. While characters don’t have determined classes, they each specialize in a certain department and their play style will become clear immediately.

While the game’s textures may be a bit dated it’s difficult to find any scene in this game that isn’t visually brilliant. Eternal Sonata is clearly intended to be a masterful work of art, and succeeds in just about every aspect. It is a graphical masterpiece showcasing vibrant forests of color, rolling dreamscapes, breathtaking vistas; even the poison-filled swamp is a sight to behold. In a game that’s based on music, it is a treat to have such eye-opening visuals constantly on display. There are times when the movements of non-player characters look rigid and awkward, but for the most part the animation style is very smooth, especially in combat. There are also some static NPC’s that look like they’re part of the scenery, but these are mostly just extras that might as well not even be there. One thing that really stands out about the graphics is that the text and menus are incredibly crisp and clear. This may seem a small detail, but when it comes to a game that’s mostly text and menu based, it becomes an important detail.

The first thing that needs to be mentioned is that the voice-overs for the character speech are sub-par. The game does offer the option to switch to the original Japanese voice-overs, but I found this to be irrelevant since I don’t speak the language. The voice recordings are of a high quality audibly, but the delivery of the lines is tolerable at best. The other in-game sound effects such as combat sounds or even just the simple chimes from menu selections are wonderful. They are very fantasy-themed and fit the setting of the game without question.

Now for Eternal Sonata’s claim to fame: the music. Many of Chopin’s most famous pieces are recreated in the game’s soundtrack, with many brilliant original pieces accompanying them. Composer Motoi Sakuraba, who composed the music for Golden Sun and Infinite Undiscovery, did an unbelievable job on the game’s music. Each area has its own epic score to accompany the sublime visuals, usually a serene melody or peaceful orchestration. One of the most impressive things about the overall soundtrack is Sakuraba’s versatility in writing. The vast difference between a tranquil forest and a fierce battle is something that is difficult to transcend without making them feel like two parts of different sources. Every track of Eternal Sonata’s soundtrack seamlessly blends with one another, making for a pleasurable experience even when not playing the game. I highly recommend picking up the soundtrack separately, you won’t regret it.

Eternal Sonata is an amazing game with an even more impressive list of awe-inspiring features. The music alone is enough to warrant a playthrough of the game aside from its classic RPG-style gameplay and stunning visuals. There is multiplayer capability in combat with players being able to assign themselves to any of the three party members, but this is the only multiplayer interactivity in the game. The time spent exploring the overworld and interacting with the characters on screen will all be controlled by the first player. This makes battles incredibly fun, but might bore the second and third player. If you can find some extra players willing to sit through the single-player overworld exploration stages, combat becomes beyond fun with everyone discussing their strategy and timing their attacks accordingly. This game will keep you occupied for hours with the leveling system, hidden musical pieces to find, and side quests, and will even keep you coming back with the difficult encore mode once the main game is finished. Take a ride through the dream and get lost in the reality of it all.

Alice: Madness Returns Review! Another trip to the insane world of Wonderland!