NCAA Football 13 Review! Strap On Your Virtual Helmets And Hit The College Gridiron!

Have you ever wanted to take a Heisman great and see if he can win a National Championship with your favorite University? Well you can and much more in NCAA Football 13! 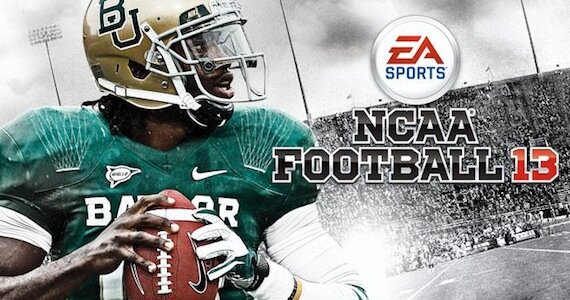 Hey gamers. It’s that time of year again to strap on your virtual helmets and hit the college gridiron in NCAA Football 13. All the classic game modes are back ranging from college dynasty’s to online dynasty mode and the road to glory mode. New to this year’s game is Heisman Challenge.

In Heisman Challenge you’re tasked with choosing which Heisman great to mimic or to out preform: Charlie Ward, Marcus Allen, Eddie George and Carson Palmer to name a few. As always with EA’s sports games you can also shell out some cash for additional Heisman players. This is a fantastic addition to this game. The ability to see Marcus Allen and other greats wearing your favorite schools colors are very rewarding. You’ll also be treated to a short clip of the players talking about their college careers before you start.

Before you start each game in Heisman mode you’ll be able to see your target goals. For example: Carry more rushing yards than Mark Ingram in a game, with a target marker of 246yds. This is a great tool in letting you know how close or how far away you are from winning the Heisman for your star. The gameplay in this mode runs exactly like road to glory. You control only your player and have no control over what play is called for an entire season. A new gameplay feature in Heisman mode and RTG is the ability to slow down time by holding down the left trigger. You can only do this for certain periods of time so use it wisely. It will regenerate after a few plays.

New to Dynasty mode this year is dynamic pitches and scouting. The scouting works great for finding diamonds in the rough or seeing that a five star recruit isn’t what he appears. Although dynamic pitching is supposed to feel new it comes off as a rehash of the old recruiting model. The load times are still way to long but can be slightly shortened if you install the game. The in game controls have been tightened up on offense making it slightly easier to move the ball on the defense. Running the ball is amazing this year. Hitting the holes your lineman creates can be adrenaline pumping feats especially if you break out a fifty yard run. In the passing game this year, a little but huge tweak occurred. Your receiver will actually come back for a ball on a curl or comeback route instead of stopping. This is something longtime fans have been calling for.

Online Dynasty is back and is a great way to play with your friends across the country. Nothing beats filling up the PAC 12 or SEC conferences with like-minded friends or family. Running through multiple seasons and bragging rights up for grabs. You can even access the off season with a personal computer which is a nice touch. However if you decide to play with people you don’t know, be warned that you’ll have to defend against glitch plays and unrealistic football play. As with all online play it all depends on the other player for an enjoyable or horrible experience.

The presentations in these modes are top notch and EA makes good use of their rights to ESPN. They’ve managed to make the game feel like you’re watching a sat morning contest right after College Game Day. Kirk Herbstreit and Brad Nessler are back calling the games.  You’ll still hear repeats here and there but it’s nowhere as bad as last year’s version. They even added a sports ticker at the bottom of the screen during your games, so you can see live scores and updates for your season. The game will be interrupted occasionally to bring you an update about a particular game in progress, which is a nice touch to make you believe it’s a telecast. Unfortunately fans of the series will notice the same old cut scenes again and again, from the opening of a game to the final play. These scenes get old fast and there’s really no excuse to use the same ones year after year.

So if you’re a fan of NCAA Football you’ve already bought and are enjoying this game. If you’ve been a fan before and have stepped away, waiting for new features, then this might be enough to draw you back. With the addition of Heisman mode and the tweaks to the gameplay it may be enough to draw you back. If you’ve never played before and would like to try a sports game that you can play with your favorite college teams then this might be for you.

NCAA Football 13 was reviewed on the Xbox 360

Ghost Recon: Future Soldier Review! Do You Have What It Takes To Be A Ghost?

Darksiders Review! It’s a Hell of a ride!

Mortal Kombat Review! A Blast From The Past, A Window Into The Future!