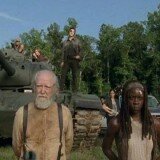 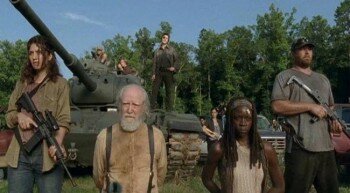 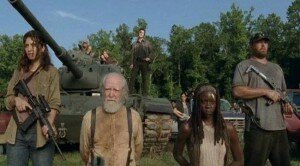 It’s the episode that  the fourth season of “The Walking Dead” has been building towards – the final reckoning between the prison group and the Governor. The mid-season finale brought an epic battle between the two groups, and the sad loss of at least one favorite character. Let’s jump into the recap.

The Governor is trying to talk his new followers into trying to take over the prison, telling them that the camp offers no long term protection against the walkers. “If we stay here, we die.” We see that he has kidnapped Hershel and Michonne, and he tells the group that they can use the two of them to take the prison without even firing a shot. He tells them that, while some of the prison group are not bad, the majority of them are murderers and thieves. The Gov. certainly has a talent for getting people to drink his Kool-Aid, eh? His new group jump on board without hesitating, all except for Lilly, who has major issues with killing others to take away their stuff.

Hershel and Michonne are tied up in the RV. Michonne stares daggers, while Hershel unsuccessfully tries to make peace by negotiating a friendly co-existence among the two groups. The Gov. leaves Lilly and Meghan by the river, and tells them that they are safe there because the walkers can’t make it across the water.

At the Prison, Glenn and the others are recovering from the virus. Daryl is furious that Rick exiled Carol for executing Karen and David. They go to find Tyreese to tell him about Carol. Sasha thanks Bob for helping to save her life.

Rick and Daryl find Tyreese, who has found a mutilated animal in the prison. Before they can break the news about Carol, the Governor and his cavalry roll up to the front gate and demand a meeting with Rick. They show Hershel and Michonne being held at gunpoint. Rick approaches, and the Governor tells him that the prison group must leave by sundown. Rick tells him that there are sick children, and they won’t survive out there.  The Governor points out his tank and asks, “What else is there to talk about?” Meanwhile, Daryl gets what’s left of the prison group into their defensive positions.

Lilly is preoccupied by a walker attempting to cross the river. In the meantime, Meghan is bitten by a mud-dwelling walker. So much for safety!

The standoff at the prison continues as the sun starts to go down, and Rick continues to try for peace. Carl and Daryl take aim from behind the fence. After Rick makes a passionate speech to his enemies, The Governor beheads Hershel. Noooooo! An all-out shoot out ensues, Rick is hit in the leg. Lilly arrives carrying Meghan’s body, and the Governor finishes her off before she zombifies. The tank rolls through the chain link fence as the bullets fly and all hell breaks loose. Rick is getting his ass royally kicked by The Governor, but is saved by Michonne, who runs a spear through his chest. Lilly finishes The Governor off by shooting him in the head.

A frantic Rick finds Carl, but there is no sign of Baby Judith. Only a bloody car seat remains. Half of the prison group takes off in the bus, while the others run off in separate directions. The group is now divided, Hershel-less and again on the run from the hordes of walkers.

And, with that, “The Walking Dead” season 4 ends with an action-packed, yet horribly sad finale. In many ways, Hershel has been the paternal figure for the prison group, and his murder at the hands of The Governor will surely have us fans feeling a little bit orphaned. On the plus side, at least we got rid of that evil, one-eyed S.O.B. The producers definitely turned up the intensity on this season of “The Walking Dead”, and many of us have the elevated heart rates to prove it.

Many questions remain: Is Baby Judith dead, or has it all been a horrible misunderstanding? Will the prisoners find each other again? Is the prison even viable anymore? We’ll all have to wait until February to find out!

Game of Thrones 5.02, “The House of Black and White” Review

Once Upon a Time: "Sympathy for the De Vil" Review

In short everything’s terrible, but there is still enough room[more]

Once Upon a Time: "Heart of Gold" Review

Read our review of ABC's "Once Upon a Time" Season[more]

Game of Thrones Season 5 Episode 1, “The Wars to Come” Review

“The Wars to Come” really is an episode about just[more]
Latest in Television: