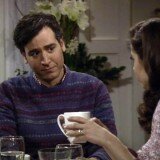 How I Met Your Mother S9/E19 Review: “Vesuvius”

It might just be the fact that I watch a lot of other shows during any particular television season. Or it might be the fact that How I Met Your Mother has been on for 9 years now. That’s a lot of time, a lot of content, storylines, hints, clues and characters to keep track of. I find myself having to constantly refresh my memory on certain things that happened in previous seasons. Ideally, I would go back to season 1 and get a first rate crash course in the series by re-watching it. With just a handful of episodes left, I probably won’t have time for that.

Once the show is finally finished, I’ll want to go back and watch it start to finish, but getting so close to the end of the series has got me thinking about, well, the END of the series. I haven’t thought a whole lot about where everything will finally collide. How exactly will the Mother and Ted meet? What will happen in the final moments of the show? And perhaps the most important question that’s been on my mind lately, which is why is Ted telling his kids this story?

After watching “Vesuvius”, an episode that features a heavy level of underlying sadness, I couldn’t help but take to the web and see if others had similar thoughts to mine. As it turns out, my thought was reinforced with a fairly well known theory by Jenna Mullins, in which she outlines various reasons she believes the Mother may actually be dead in the present tense, prompting Ted to tell the story, while also giving semblance to a couple of recent, somewhat puzzling sad moments.

“Vesuvius” is told somewhat differently from most episodes. Ted is with The Mother at a dinner where they discover both have finally run out of stories and become an “old married couple”. Of course they are delighted by this, but as I said a certain melancholy floated through the whole episode. Ted tells the Mother a story about a broken vase, believing she has never heard this story before. Part way through we find out she has, but the story continues through.

The story itself is Lily trying to get Robin to appreciate her wedding day, as it only happens once in a lifetime. Ted is summoned by Barney to pick out the most important suit of his life. His wedding suit. Personally I found these individual stories slightly slow in themselves, but the overall messages and themes explored during the episode have stayed with me.

The ending is what I’ve spent a lot of time pondering. Something is either happening to Ted, or the Mother, and though I can’t say for sure what it is. The theory about the Mother being dead in present tense is starting to look a bit more likely. I know the writers had the ending planned from the beginning of the series which is always a great thing in my opinion. I think ending the series on a sad note could be a major gamble since the show has always been so centered on comedy. At the same time, the greater the risk the greater the reward, and I believe that having an ending with that kind of emotional punch could really put How I Met Your Mother as a whole, above and beyond the normal sitcoms it’s often lumped in with.

We only have a few weeks left until all these questions are answered. “Vesuvius” while a bit bland from the outside perspective is actually a very strong episode in terms of subtext. I liked it quite a bit, but not immediately. Let it sink in. I think you guys will like it, too.

More articles by Mikeoldboy »
B

Skye is rushed to a private facility and with the[more]