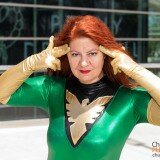 Never Give Up, Never Surrender: Cosplay After 40 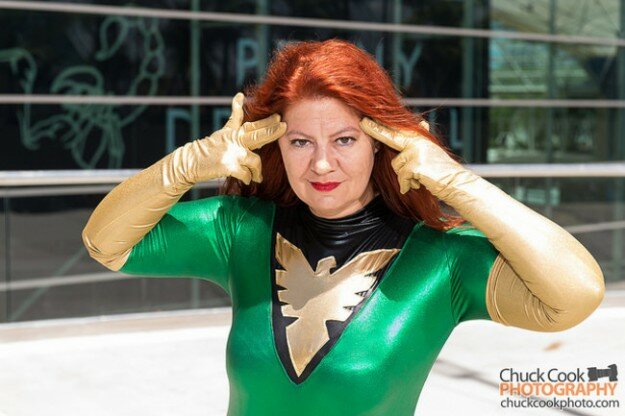 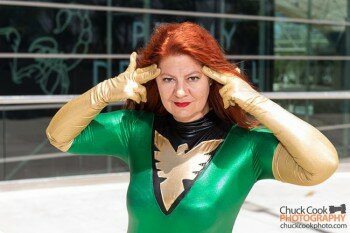 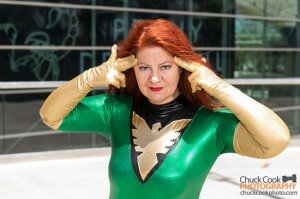 My name is Phaedra Cook, I am 46 years old and I’m a cosplayer.  That sounds like some kind of intro to a confession at an Alcoholics Anonymous meeting, doesn’t it? There are certain types of people who would like me to have a sense of shame about my hobby, but that’s not going to happen. Cosplay has been beneficial and it is my little way of combating ageism.

Cosplay wasn’t a “thing” when I was in my 20s and 30s—at least as far as I knew. For that matter, I was far too busy raising three kids, running my own graphic design and IT businesses and maintaining a marriage to have much in the way of hobbies. The first pop culture convention I ever attended was San Diego Comic-Con in 2009. Talk about starting big! We have been lucky enough to score tickets every year for the past six years.

The first year, I was in awe of the cosplayers running around in elaborate costumes and, quite frankly, a little jealous. My husband’s hobby (and now part-time job), by the way, is photography, so he was having a field day taking photos. (Check out his photos from this year’s SDCC).

The second year, I didn’t want to be left out. I did a half-assed “cosplay” of Death from Sandman which consisted of a black tank top, black jeans and the appropriate squiggle drawn out to the side of my right eye. I thought I looked okay until I saw someone who put some real effort into it and looked 100% better than I did. My ego, at that point, was crushed.

It was 2011 when I did my first actual cosplay: a Dark Phoenix costume. I found a red, one-piece leotard, bought gold stretch spandex and had a friend make the sash, cut out the emblem and sew it to the front. I found gold, elbow-length gloves online, had my friend modify them so they had points at the top and found a pair of thigh-high gold boots. It was a good cosplay and one that I improved upon over the years. 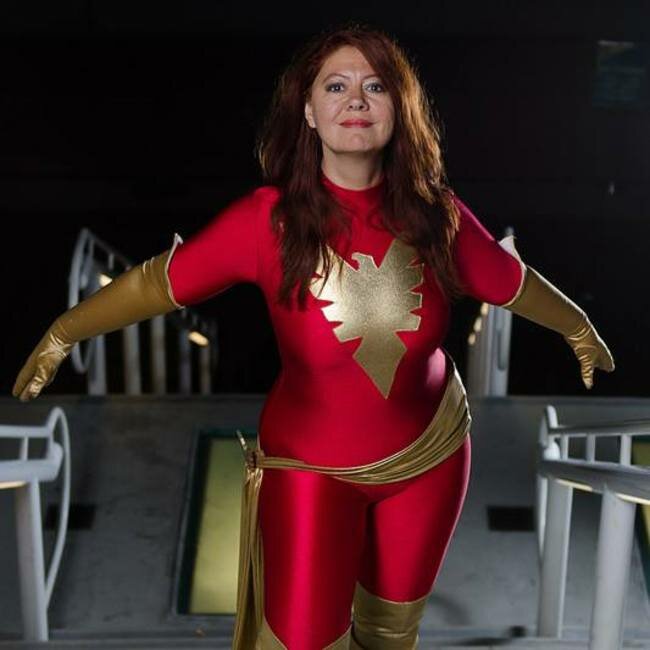 2012 was the first Course of the Force, so in addition to my Dark Phoenix costume, I put together a Mara Jade cosplay. It was another success, but I was disappointed in how the fabric for the bodysuit wore thin after just a few wearings. I needed to get more control over the construction of my costumes. It was time to learn how to sew.

In 2013, with no experience under my belt except for a single local sewing class, I embarked on making a new bodysuit out of stretch vinyl for my Mara Jade costume. It was incredibly frustrating, but I kept hammering away at it until I had something that looked good enough to wear. I also made my first green Phoenix costume out of green metallic stretch Spandex. There were some problems there too (who knew that sewing an inset “V” was a geometry exercise?) but I managed to scrape things together again.

That was also the first year that I realized that most professional photographers didn’t have much interest in taking photos of my cosplays, and that hurt. My husband did, of course, and he is an excellent photographer. So did Andreas Schneider, who is absolutely amazing and I was so incredibly flattered when he chose two of my photos for the Cosplayers Canada SDCC magazine that he produces and sells. (Get a copy of the 2014 one for yourself. It showcases Andreas’ stunning work with photos of over 300 cosplayers from San Diego Comic-Con.)

On the other hand, one photographer half-heartedly snapped off a few shots and made it quite clear that he was only interested in shooting hot chicks. Most other photographers didn’t even look at me twice. I was never even up for consideration. They’re looking for young, thin women and I just don’t qualify.

It stings, but something else happened along the way: I was getting an incredible amount of support and positive feedback from women my own age, as well as many younger people, even those who do not cosplay themselves.

I decided that I wanted to have the same kind of support system in my hometown in Houston as many cosplayers based in Los Angeles have. I started Houston Cosplay. We haven’t had many meetings, but we do have a Facebook page where we give each other advice and lend support. We’re still small, but I’m proud of the fact that we’re up to 45 members.

This year, 2014, I have to say I outdid myself. OK, actually, I overdid it. I had a new costume every day and honestly, that’s kind of insane. Even professional cosplayers don’t do that, but I do have to say that I am incredibly proud of what I accomplished. My sewing skills are better now. I remade my green Phoenix costume better and out of a colorfast fabric. (Sadly, the green faded out of the first one in just washing. Hours of work literally went down the drain. (Always wash a sample of your fabric before you make a costume out of it!)

A week ahead of SDCC, I threw together a “Doyouwanna Troi” cosplay from Robot Chicken’s Star Trek: The Next Generation spoof “Night Crew.” 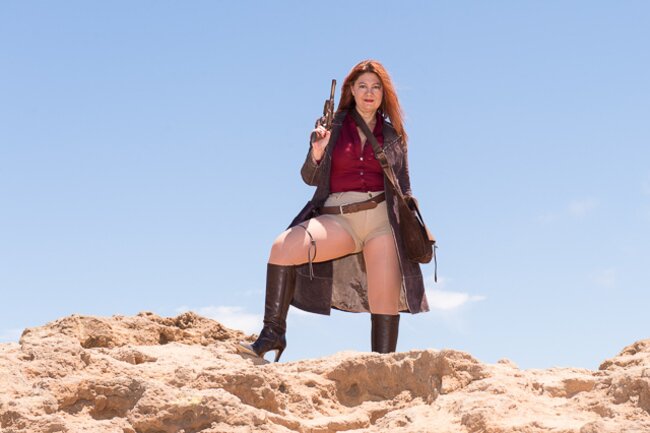 The day before SDCC, my husband and I did our first location shoot of my crossplay Malcolm Reynolds costume. Because I was busy with my other costumes, I commissioned a Lynda Carter-style Wonder Woman costume. My husband and I made the tiara and bracelets from Worbla. Finally, I altered a corset and made a lined cape for my Jean Grey Black Queen costume. (After wearing it at SDCC, I have to say that more of you young people need to read X-men: The Dark Phoenix Saga! I was mistaken for Selene twice, who is a later version of the Black Queen.)

Why go through all this time and expense at my age? Why not just grow up?

Well, being a grown-up is highly overrated, first of all. Grown ups don’t have enough fun, frankly.

Second, cosplay encourages me to work out and take good care of my skin, nails and teeth. I look good for 46 and many people think I’m in my 30s when we first meet.

Third, despite some of the snubs, cosplay has helped me build my self-confidence. It takes a whole lot of guts to stride confidently down a public street to a convention center in costume. The cat calls and jokes I hear along the way aren’t “fun,” but I’ve learned to handle them with grace.

Fourth, I never feel more vital, energetic and young than when I’m in costume. It’s an act of rebellion. There’s a segment of society that discards older women and thinks they should be relegated to a role of caring for others. If you’re a sexy older woman, you’re denigrated as a “cougar,” like there must be some inherent immorality surrounding it. Cosplay is my way of giving the finger to those people.

It’s not just older women who need to get the message of being vital and caring for themselves. I want younger women to know that there should be no fear about getting older. Whether or not you feel confident and sexy has everything to do with how you take care of yourself and whether you assert your right to be the person you want to be.

I still have confidence problems sometimes. There are some amazing group cosplays that I’m never invited to. These are generally groups of younger, female cosplayers and I think I’m never invited to participate because they think I’m too old to fit in or maybe just not good enough. That’s okay. It just means I need to work on putting together my own group, like the Night Crew cosplay that we did this year. 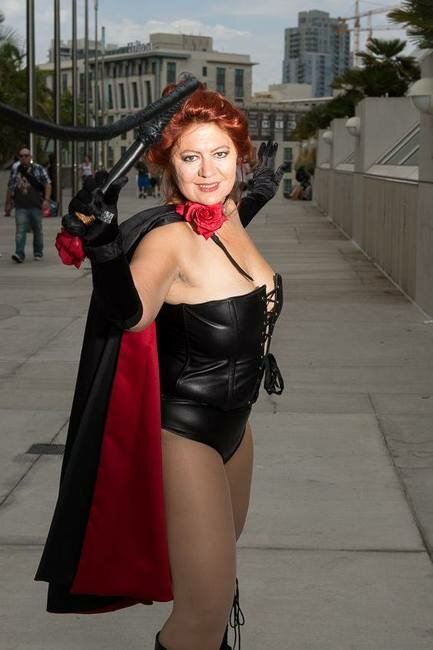 I’m still too heavy. I have 20 to 40 pounds to lose before I’m going to be entirely happy with myself again. I’m a food writer in Houston and keeping weight off can be challenging. Fat loves to settle on my hips and thighs. But I’ve stepped up my workout program and am enjoying having a trimmer waist, flatter stomach and more toned arms than I’ve had in years.

When I hit 50, I’ll focus on more age-appropriate cosplays. I already have some in mind: Catlyn Stark from Game of Thrones, “Dark Woman” from the Star Wars graphic novels and Molly Weasley from the Harry Potter movies. These women are all badasses and characters I will be proud to emulate. But I’m not quite there yet. For me, it’s Spandex until I’m 50, and if you don’t like it, tough.

Be sure to check out more of Phaedra’s amazing cosplay work at her Facebook and Twitter pages.