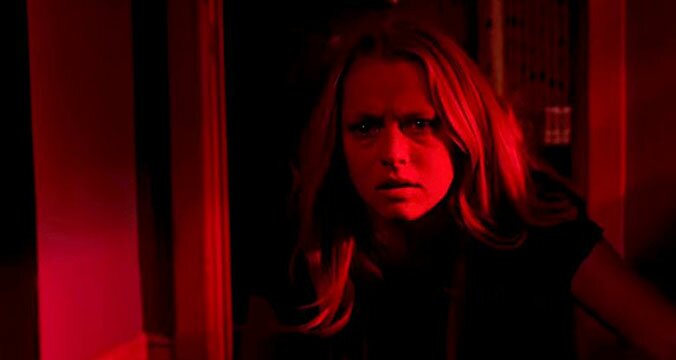 The most common fear people have is the fear of the dark. Some people grow out of it and some don’t; but the newest horror flick Lights Out preys upon it. Based on the short film by David F. Sandberg, Lights Out centers on a family that is haunted by a mysterious being that inhabits the shadows. Sandberg returns to the director’s chair for its silver-screen adaptation and delivers a terrifying spectacle with a unique and intriguing backstory.

Becca, our heroine, is played by Teresa Palmer, who offers little more than a punk-rock attitude and an insanely pretty face. Her boyfriend Brad—who is also insanely pretty—is, on the other hand, ridiculously likable and continuously outdoing himself. Brad looks like a douchey supermodel but acts like the feminist Ryan Gosling meme. He’s honest and open and communicative and knows all the right things to say and do and I really wanted to hate him.

And then we have Maria Bello who does a fantastic job as Becca’s manic depressive mother, Sophie. She suffers from depression and visibly struggles with her disease, but she doesn’t let it turn her into a villain or a victim. Mental illness is rarely attributed to the good guys of horror films, let alone is it a central theme in the story. Bello is believable and sympathetic during Sophie’s high’s and low’s, and she portrays a woman who struggles to show that she can be so much more than her illness.

The concept is simple and effective: a creepy, ghost-like lady is only visible and powerful in the darkness. And it doesn’t take long to find out her name: Diana. She disturbs some and brutally murders others. When she moves, her thin body makes an eery creaking sound like a tree splitting in two. All you can make out is her outline and her tiny, white eyes, but it’s clear that her hair is greasy and stringy. She hunches over and picks at the floor with her long, tapered fingers, carving her name into the boards, and she spends most nights in long conversations with Sophie, her only connection to this world.

Diana and Sophie—suffering from a lifelong history of mental illness—met at an institution when they were young. Diana was diagnosed with a rare skin disorder that made her sensitive to light (photosensitivity, it’s a real thing) after being found in a basement at the age of thirteen, her father’s body in the living room with the words “She’s in my head” written on the wall in blood. It’s safe to say things didn’t end well for Diana, but her connection to Sophie remained. And so she spends her free time in the afterlife preying on Sophie’s illness, manipulating her into believing that their friendship keeps Sophie strong.

False. Diana is the supernatural version of an abuser convincing Sophie not to take her meds. She’s as terrifying as she is evil.

And speaking of terror, one of the film’s greatest strengths is its scare tactics. Lights Out manages to rely more on suspense than tacky jump scares without being heavy-handed. The film, although only 81 minutes long, is well-paced with a beautiful production design. The small cast prevents the story from escalating to a global scale that other horror films attempt (the whole world, Heaven and Hell, “she’ll never stop,” etc.). The universe Sandberg creates is contained but still logical with its own set of rules.

Lights Out is different from the flashiness of The Conjuring 2 or the brutality of Sinister, but it offers a new brand of storytelling in horror that is entertaining and downright good. I look forward to seeing more works from this director, especially if they continue having James Wan’s seal of approval.