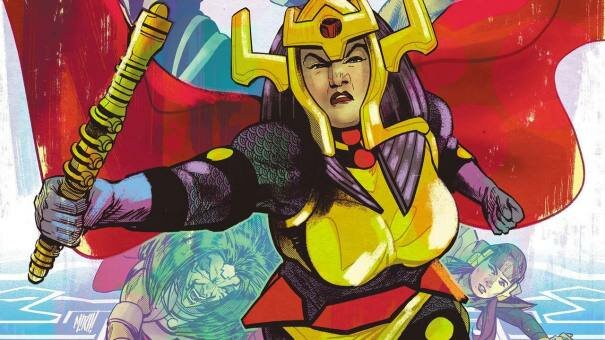 Last year was a wonderful one for comics and it seems that 2019 is shaping up to be no different. In particular, there are quite a number of wonderful crossovers to expect, new storylines to engage with, and even some promising newly emerging heroes. However, because of how large of a variety there is in the comic book industry, we took it upon ourselves to give you our Top 10 Most Anticipated Comic Books in 2019.

The comic industry can be quite an unpredictable beast. We say this because of how often things can seem like they’re in flux, but this isn’t always a bad thing—sometimes, something great needs to go for something equally important to take its place. This is why it makes sense that the sadness of Dark Horse Comics losing the rights to Buffy the Vampire Slayer will be replaced by a new Buffy based comic reboot that is set in the present day. We can’t wait to see what is next in line for this iconic franchise!

9. Brian Bendis Takes on Batman Beyond

As one of the most notable modern writers in comic books, Brian Bendis has always had a consistent hold on what it means to mix quality with quantity in a seemingly effortless manner. In 2019 Bendis is setting his horizons even further than before, with a reported comic book venture into the Batman Beyond universe planned. This is sure to be a remarkable addition to the franchise, something that we’re definitely excited about.

For some characters in the DC universe, simply being superheroes wasn’t the only thing they had to overcome when discovering their identities. For characters such as Black Lightning and Renee Montoya, protecting themselves from bigotry and prejudice was integral to them understanding and subsequently embracing their full potential. The Other History seeks to directly address this, something we’re excited to see in play this year in these exciting expansions to the DC universe.

Update: DC recently postponed the first issue release, so the planned January start date has been pushed back to a date TBD.

7. The Future is Female (Female Furies)

One of the most critically-acclaimed comics in 2018 was Mister Miracle, which is why we’re excited to say that there is a sequel-of-sorts planned to continue the storytelling surrounding the adventures of Big Barda and her New God siblings. The title of the new comic miniseries is Female Furies and will be sure to give further insight into some of our favorite comic book ladies.

Geoff Johns and Jason Fabok are set to explore one of the most interesting sections of the DC Universe: the multiple personalities (or entities) of the Joker. This supposed miniseries will elaborate on the mystery through the Black Label publishing imprint.

Image Comics has been consistently putting out wonderful books detailing the adventures of the Monstress and Saga characters, with more thankfully on the way in 2019. Though these likely won’t be out until the end of the year, the quality to be expected will be well worth the wait.

10 of the Most Highly Anticipated Comics to Read in 2018

2019 will signify the 80th anniversary of Batman appearing for the first time, making the soil tender for the superhero to receive an appropriate tribute. The celebratory issue will undoubtedly feature a star-studded line-up from Batman’s entire career, coming from the minds of Peter Tomasi, Geoff Johns, Kelley Jones, Alex Maleev, and more.

Not all comic books or graphic novels have to exist in completely fictional societies—for David Jesus Vignolli’s New World graphic novels, this means embodying history to tell a seemingly captivating story about the history of America. Told from the perspective of a Native American, an African musician, and a Portuguese sailor, this looks to be an incredibly touching—and stylistically interesting—story.

Though Conan of Cimmeria has been a strong notch in the belt of Dark Horse Comics for almost 20 years now, 2019 sees a potentially triumphant return for the cult hero to Marvel’s roster. We are very excited for the potential Conan the Barbarian stories to come, brought to life by Jason Aaron and Mahmud Asrar.

1. They Called Us Enemy

Though it may seem unlikely for a comic based on actor George Takei’s life to top our list, it’s for good reason. Takei’s experiences in the infamous Japanese internment camps during World War II paint a shocking portrait of one of America’s biggest political mistakes. Told through the artistry of Steven Scott, Justin Eisinger, and Harmony Becker, They Called Us Enemy is sure to be a compelling read if not one of the most compelling comics released this year.