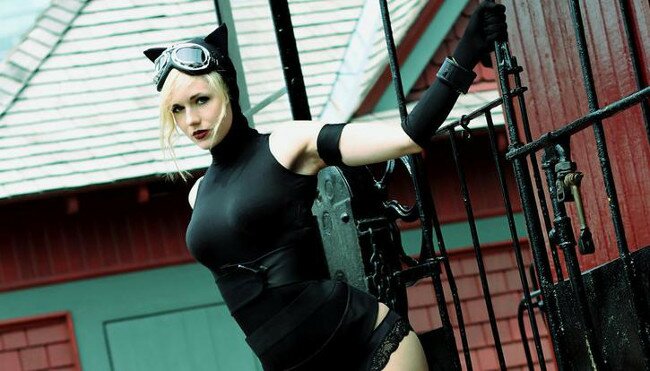 Gotham City is home to some of the finest thieves and greatest heroes in the DC Universe. There are some that we can easily forget in all the hustle and bustle of the busy city. However, Catwoman is certainly not one of them, nor is Elle-Cosplay’s Ame-Comi Catwoman.  Catwoman has had several amazing costumes over the ages, and we have seen numerous interpretations of her sexy catsuit by some pretty accomplished cosplayers throughout the years. Elle-Cosplay has proven that she is the crème de la crème by captivating DC fans everywhere with her epic Catwoman.

The beautiful and talented Canadian cosplayer has crafted a superb version of the feisty vigilante that is practical for walking around crowded convention floors for several hours while constantly posing for countless pictures—which can be extremely tiring and painful if you are in super stilettos. By creating comfy thigh-high boot covered with black spandex, Elle was able to avoid such torture while still managing to capture the sultry essence of Catwoman. While the Ame-Come Catwoman does have dark black hair, we have to admit that she looks even more captivating as a beautiful blonde.

Bow Down Before this Epic Castanic Cosplay!