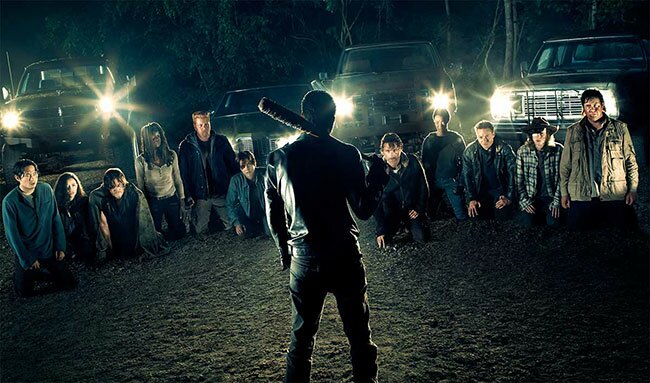 The Walking Dead Season 7 was full of loss, sadness, frustration, and finally, toward the end, some fight. Many viewers became frustrated during the first half of the season because Rick Grimes had lost his desire to fight. Some even believe that he lost his desire to live. In true Walking Dead fashion, however, Rick rallied and the fight that the audience was waiting for began.

To get you prepared for the upcoming premiere, we’ve put together a short recap of last season’s most memorable moments. Extreme spoilers ahead!

Episode 1: “The Day Will Come When You Won’t Be”

Episode 1 was considered to be the most brutal and gory episode of the entire series thus far. When the show left off at the end of season 6, Negan and his men had the Alexandria group surrounded. Negan had the entire group on the ground, approaching each of them with his baseball bat covered in barbed wire that he called Lucille. Fans anxiously waited for the season 7 premiere to find out who Negan’s victim would be. When the episode first began, he chooses Abraham, and he beats him to death with his bat. Daryl becomes enraged at the sight of this, and attacks Negan. To teach him a lesson, Negan beats Glenn’s head in with his bat. Before Glenn dies, he tells Maggie that he will find her. Negan continues to test the group, and Rick is almost forced to cut off Carl’s arm. When Negan and his crew leave, they take Daryl as a hostage. Sasha agrees to take Maggie to the Hilltop for medical treatment. They also take the bodies of Glenn and Abraham to give them a proper burial.

Carol, who had set off on her own because she could no longer handle doing the things that she had to do, was followed by Morgan. During their travels, they happen upon The Kingdom. It is a well-established community run by a former zookeeper named King Ezekiel. He rules with a real tiger by his side. Like the Hilltop, Negan also forces The Kingdom to provide resources for his group under the threat of violence. To keep the people in the community safe, he keeps the arrangement from many of them. An injured Carol recuperates at the Kingdom, but decides she needs to be on her own. After bonding with the King, she finds an isolated house near the Kingdom to live in. At the end of the episode, we find out that the King is not happy about his arrangement with the Saviors. Before giving meat to the group, he allows it to be infected by the dead, hoping that the Saviors will become infected as well.

Daryl is locked up in a cell at the Sanctuary. During his captivity, Dwight and Negan torture him, hoping to break him so that he becomes obedient. He is even given the option of becoming a Savior, but he refuses and would rather take the torture. During Daryl’s torture, Negan sends Dwight out to find an escaped Savior. When he locates the man, he states that he would rather die than go back. Dwight kills the man out of mercy.

While the survivors at Alexandria are still grieving and trying to come to terms with their new situation, Negan and his men arrive at the community early for their offering. They take most of the group’s furniture, medicine, and all of their firearms. Rick lets his friends know that things have changed and Negan is now in charge. Rosita, still grieving terribly over the death of Abraham, finds an empty cartridge case in the woods. She brings it to Eugene and asks him to make her a bullet.

Carl and Enid take a trip to the Hilltop to see Maggie, who is still there with Sasha, recovering. Gregory is angry that Maggie and Sasha didn’t manage to kill the Saviors and he tells them they have to leave. After they save the Hilltop from a walker attack, Jesus convinces him to let the women stay. During a routine raid of the Hilltop by the Saviors, Sasha asks Jesus to find where Negan lives. He agrees and sneaks onto one of their trucks, only to find Carl sitting there as well.

Not knowing what happened to her friends, Tara is separated from Heath after she falls off a bridge during a walker attack. When she washes up on a beach, a girl named Cyndie saves her. Cyndie is from Oceanside, a hidden community of women and children who are very well armed. All of the men who once lived in the community were killed by the Saviors. Cyndie helps Tara find her way back to Alexandria, but she first has to promise never to mention Oceanside or the people who live there to anyone.

As the truck approaches the Sanctuary, Jesus jumps off to check out the area. Carl stays on the truck, hoping to kill Negan. Dwight stops Carl, but Negan is impressed with Carl’s bravery and he gives him a tour of the Sanctuary. Meanwhile, Rosita and Eugene are able to craft a live cartridge. On the way back to Alexandria, they run into Spencer, who is scavenging in the woods. The three return to Alexandria, only to find that Negan and his men are there.

Thanks to Jesus and an anonymous letter, Daryl is able to escape from the Sanctuary. Back in Alexandria, Spencer is discussing Rick’s lack of leadership with Negan and he guts Spencer in the middle of the road. Rosita becomes enraged and she shoots at him. Unfortunately, the bullet hits Lucille instead. As a result, Arat kills Olivia and Rosita’s face is slashed. Negan and his men leave with Eugene as a hostage because he made the bullet. Rick has a heart-to-heart with Michonne, and he is finally ready to take on the Saviors. He takes a trip to the Hilltop to see Maggie. Soon after, Enid, Sasha, Daryl, and Jesus come out of a building and they have a group hug.

When the people from the Hilltop agree to fight the Saviors, Jesus takes the group to the Kingdom to meet Ezekiel. They also reunite with Morgan. Ezekiel doesn’t want to put his people in danger by fighting, but he does offer Daryl asylum at the Kingdom. The Saviors raid Alexandria looking for Daryl, but they don’t find him. Soon after, Rick realizes that Father Gabriel has taken supplies from the group. He leaves clues to find him, and it leads the group to a dilapidated yard. When they arrive, they are surrounded by the Scavengers.

Rick speaks to Jadis, the leader of the Scavengers. She agrees to join in the fight against the Saviors, however, she demands that Rick give her guns in return. Back at the Kingdom, after Ezekiel refuses to fight against Richard’s wishes, Richard plans to kill Carol and blame it on the Saviors. He thinks that this is the only way to get Ezekiel to fight. When Daryl finds out, he tells him that he will kill him if Carol is hurt in any way. Daryl stops by to visit Carol. He lies to her about Glenn and Abraham dying, and he heads to the Hilltop to prepare for battle.

When Eugene arrives at the Sanctuary, he fits in quickly and he is treated like a VIP. He bonds with two of Negan’s wives and he makes them a poison capsule, believing that they are going to kill themselves. When he finds out they are planning to kill Negan, he refuses to give them the pill. Dwight finds a note from Sherry saying that she freed Daryl and that she was leaving forever. To protect Sherry, Dwight frames the doctor for Daryl and Sherry’s disappearance. As punishment, Negan throws the doctor into the furnace.

Michonne and Rick go hunting for guns to give to the Scavengers. They end up at an abandoned carnival at a school, where they find dozens of guns. They give the Scavengers the guns, but Jadis wants more. After an internal debate, Tara decides to tell Rick about Oceanside and their weapons. Meanwhile, Rosita is getting frustrated, so she heads to the Hilltop to find Sasha to make a plan to kill Negan themselves.

Ezekiel and the group meet up with the Saviors to give them their offering and the Saviors discover that there is a cantaloupe missing. Suddenly, Jared shoots Benjamin, who sadly bleeds to death. When Morgan finds the missing cantaloupe in the streets, he finds out that Richard sabotaged the drop-off. He wanted it to be him that was killed to push Ezekiel to fight. In a fit of rage, he strangles Richard for causing Benjamin’s death. Next, he finds Carol and tells her what happened to Glenn, Abraham, Olivia, and Spencer. She immediately heads back to the Kingdom, ready to fight the Saviors.

The Saviors arrive at the Hilltop without any warning, which forces Darryl and Maggie into hiding. They take the Hilltop’s doctor because his brother was their doctor but Negan threw him into the furnace, so they need a replacement. When Rosita and Sasha see Eugene while sneaking into the Sanctuary, they tell him to escape with them and he refuses. Quickly, Sasha locks Rosita out of the Sanctuary and tells her to go back to Alexandria because they need her. Sasha breaks in to kill Negan and Rosita runs off, but she notices that there is someone watching her.

Episode 15: “Something They Need”

Tara leads the group to Oceanside. Everyone there is angry that she brought people to the community. Rick tries to convince them to fight, but they won’t. She does allow Rick and the group to take their guns. When Negan finds Sasha, he locks her in a room. He tells her that he knows that Rick plans to fight back and he asks Sasha to join in the fight. She tells Eugene that she needs a way out and he gives her the poison capsules that he made. When Rick and the group return to Alexandria, they find Rosita is there with Dwight, who wants to help them take down Negan.

Episode 16: “The First Day of the Rest of Your Life”

Negan and his men arrive in Alexandria with Sasha trapped in a coffin. What Negan doesn’t know is that Sasha committed suicide in the coffin with the capsules that Eugene gave her. When he opens the coffin, the undead Sasha attacks Negan. During the fight, the Scavengers reveal that they have double-crossed Rick. They were working with Negan all along. A gunfight quickly escalates and Negan and his men retreat along with the Scavengers. All three communities are hit badly and Michonne is seriously injured. This doesn’t change the communities’ desire to fight. Instead, they prepare for an all out war. Sadly, Maggie and Jesus find Sasha who is now a walker and they put her down.

The Legend of Korra Book 3, Episode 8 Review: “The Terror Within”