It’s that time of year, my favorite epic readers. It’s October, Halloween is around the corner, and if you guys are anything like me that means it is time to dust off some of the old survival horror favorites and game until we scare ourselves silly. This is a yearly tradition for me, and I am sure I am not alone.

Sure, you could sit down and watch a horror movie and it would be scary, creepy, and uncomfortable. The wonderful thing about playing a scary game is that you are literally interacting, making things happen, forcing yourself to turn that corner knowing in your terrified heart of hearts that a zombie dog is probably going to crash through that window at any moment to make you crap your pants and yelp in terror. You feel like you are living every second of panic and that is what truly makes the survival horror game experience so fantastic.

What makes a great survival horror game, in my humble opinion, is when a game places you in a horrifying situation and a lack of ammo (be it bullets or film a la Fatal Frame) when you know you are about to be surrounded but hordes of enemies with nowhere to go while you stand there trying to map out how you will make it through.

I love being haunted by creepy little girl ghosts, I love solving insanely hard puzzles, and I love that most games have multiple endings, ensuring that there are consequences for your actions whether they are good or bad. While the genre has admittedly been lacking for a few years, the passion of fans has yet to disappear, leaving most of use excited about the possibilities the next-gen consoles have in store for the resurrection of survival horror. With games like Silent Hill 2 and 3 being remade in HD, to games like The Last of US bringing a fresh approach to the style, there is a new excitement in the air about what is to come. Some of my all time favorite survival horror games were from the Playstation One era, so with the Playstation 4 release right around the corner let’s take a look back at some of the most frightening games ever from Sony’s first gaming system!

Anyone that read or watched Jurassic Park in the 90’s knows that dinosaurs can be seriously cruel and frightening. Dino Crisis did dino-horror (yes, I just made up a word) just right. Now I know that a lot of fans out there have a preference for Dino Crisis 2, which was a great game also, but I feel that Dino Crisis was a more true survival horror game, where as Dino Crisis 2 could be considered more of an action based horror game at best. Think of it as Resident Evil with fast, extremely vicious (and difficult to beat) dinosaurs instead of virus ridden zombies. Much like Resident Evil, you are a part of a special forces team on an island full of prehistoric creatures who run at you with such intensity that you have very little time to think about your next move or the fact that you have little ammo or health. You spend a lot of time being terrorized by a menacing T-Rex who continuously eats all of your buddies one by one. The game has multiple endings that are dictated by your decision late in the game about what to do with Kirk, your human nemesis in the game. The game is unforgiving in the best kind of way and you truly have to work hard to survive, which is why it is one of the best old school horror games. 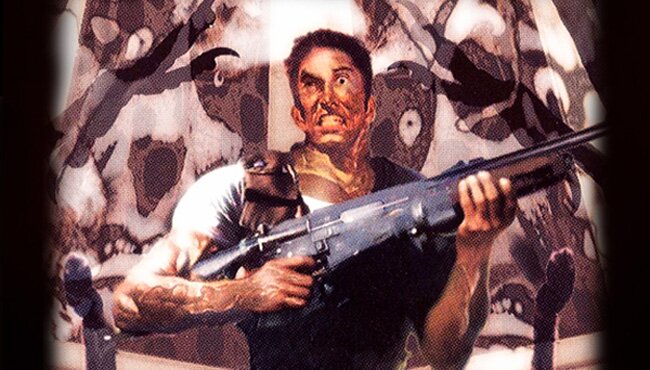 There is no complete list like this without Resident Evil. Resident Evil was the origin game for the golden years of survival horror and it is responsible for taking the genre to a whole new level. Gamers knew there was something special about it the first time Chris or Jill sets foot set foot in that mansion. The game set the tone for future games of its kind, including character controls, the lack of save points and health, and tiny inventories that forced you to make tough decisions about what was vital to remain alive. The story was full of mystery and betrayal, terrifying moments, and zombies galore. Though the series has taken a turn away from its horror roots and become saturated with action and very little horror atmosphere, (much to the frustration of old school fans), there is hope that the developers will get back to the roots of the resident evil series and start scaring us again.

Technically, this Clock Tower is the second in the series after the original Super Famicom game was released only in Japan. The game takes a different approach to survival horror, utilizing the point and click approach. The main character, a girl named Jennifer who is coping with the horrors and murders witnessed in the first game at the hands of her soul tormentor, Scissorman, who is an eerie creep who chases her with a giant pair of bloody scissors. The game leaves you to fend for yourself using your environment to hide and disguise yourself against the creepy predator and if you are attacked you have nothing to defend yourself with. Instead you go into “panic mode” and just hope you can mash the button fast enough to get away from the bastard. You are given the chance to control several characters throughout the game and depending on your decisions you can get up to ten different endings. This game is terrifying in a less conventional way, playing on the psychological fears of the player rather than the “zombie jumps out and devours your face” approach that are more common.

One of the reasons I love this game so much is because Square took survival horror and RPG and made a perfect hybrid baby with them based off of a Japanese Sci-fi horror novel. What’s not to love? You play as Aya Brea, a NYC cop, and you spend six days trying to figure out how to defeat a crazy mutant named Eve who is hell bent on creating the “ultimate being”. It makes for a unique gaming experience and though at times the active battle system can take you out of the element of the story, this game still provides some incredibly spooky moments and it deserves its spot on the list.

While some of these other titles scared me, Silent Hill was the first game that made me so uncomfortable that I had to sleep with the lights on. I truly feel that the first Silent Hill brought together all of the elements of survival horror and did them justice. The controls were difficult, which only added to the panic you felt while trying to escape the grotesque enemies. The game features many puzzles and multiple endings, and the mysterious story keeps you engaged and confused all at once. The town itself was a full character, weaving in and out of the abandoned, yet unsettling town and its nightmare version while Harry tries to find his daughter without succumbing to complete madness from all of the atrocious things he witnesses. The game isn’t perfect; the story can be hard to follow at times and the controls are frustrating when you get into a panicked situation, but that isn’t unusual for a survival horror game. This is considered by many one of the scariest games of all time and it paved the way for many more in the series, though Silent Hill 2 and 3 are by far the best. Unlike many others on this list, the sequel to this one stays on board with the genre and in some opinions outshines its predecessor, even introducing one of the most feared villains in the survival horror universe, Pyramid Head. Silent Hill was essential to the Playstation One era of spooky games and remains a fan favorite.

There are some games that didn’t make the cut that were wonderful, yet slightly more obscure. Koudelka had a seriously creepy storyline, centering around three main characters who try to discover of the hellish history surrounding the Nemeton Monastery, but the tactics based gameplay made it hard to get a really intense experience. Echo Night was a decent point and click ghost story themed game, but unfortunately the horrendous graphics were the scariest thing about it. These games all set a new precedent for future games full of torment like the brilliant Fatal Frame series, Dead Space and even Bioshock, which had many elements of survival horror incorporated into its story.