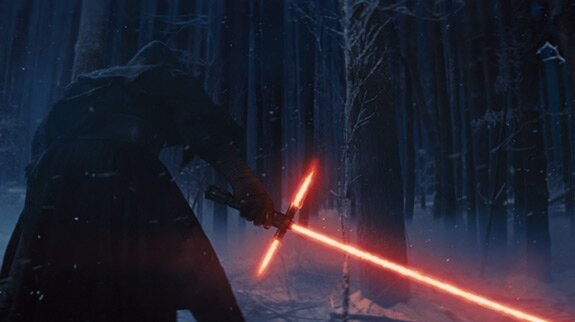 If you ever wanted to learn more about the creation of BB-8, John Williams’ amazing musical score or watch Daisy Ridley’s audition, than the Episode VII special features are for you. Whether you can’t get enough of the movie, or just want to be that guy who knows all the facts and decides to tell his friends about them at the most inopportune moments, there’s something for just about everything in this lovely collection of extra tidbits, and we’re going through each of them to let you know what’s great, and what’s just okay.

Secrets of The Force Awakens: A Cinematic Journey

This is an extremely in-depth and interesting special feature. It shows, in detail, nearly every important moment of the creation of Episode VII, beginning with Disney’s acquisition of Lucasfilm, and ending with the near-finished product.

All the scenes on Jakku were shot in Abu Dhabi, which looks painfully hot, especially for poor John Boyega, who looks like he’s about to pass out while dressed up in stormtrooper armor. The Jakku scenes were the first to be shot, and you can feel the excitement as you watch both cast and crew begin this cinematic adventure.

Some of the most engaging moments of this feature deal with the cast, and their impressions of the film, as well as the struggles they experienced in filming. At one point, we get to see one of Daisy Ridley’s auditions, in which she performs the mind-reading battle scene between Rey and Kylo Ren. What’s intriguing is that even from her earliest auditions, she seemed destined for this role. Her performance in the audition and the one that we see in the film are surprisingly similar, which gives credit to Ridley’s skill and acting ability.

Another great cast moment deals with Harrison Ford, and also Peter Mayhew (who play Han Solo and Chewbacca respectively, as if you didn’t know that). Ford, as we’ve seen through social media and TV appearances, is just as grumpy and cynical as he seems to be, and is a polar opposite to Mayhew, who approached his return to the wooly Chewy suit with respect and humility. However, when all is said and done, and Ford’s filming was complete, he was treated to an emotional standing ovation to celebrate his legendary career.

There is so much content in this feature that it’s impossible to talk about every single aspect, but it clearly stands out as one of the best features in this collection.

The Story Awakens: The Table Read

This is a short but sweet feature that briefly describes the experience of having the whole cast, both newcomers and veterans, gather to read the script for the very first time. The feelings of cautious excitement and restrained nervousness are practically palpable, especially as Ridley, who was virtually unknown at the time, shares a couch with Ford, who is surely the most lauded performer in the room.

There’s a decent amount of time dedicated to this table read during the “Cinematic Journey” feature, and this feature doesn’t add a whole lot to what we learned in the previous segment, aside from a really nice cast photo.

Now, this is what we came for, right? BB-8 took the world by storm in December 2015 with his innocence and charm, and in this feature, we get to learn all about him. It begins with the story of his design and then shows all the various kinds of BB-8s (yes, plural) that were created for the film. There is an animatronic version, a version that is pushed or pulled along by a long metal contraption, and more.

BB-8’s required functions in each scene determined which version would be used. For example, during the scene on Jakku when Finn, Rey, and BB-8 are being shot at by tie fighters, the push/pull version was used so that BB-8 could quickly travel across the sand, keeping up with his fleeing teammates. But in more subdued scenes, where the droid needed to show more emotion and humanity, the version with a remote-controlled head and body would be used. Very interesting stuff here.

Similar to the BB-8 feature, this one talks about the importance of using a perfect blend of practical and CGI effects to brings hundreds of alien lifeforms to life. What I found most interesting is that a few of the characters that I assumed to be CGI were actually not. The most memorable of these is Unkar Plutt, the junkboss who buys old components from Rey in exchange for insta-bread.

Plutt, who is played by none other than Simon Pegg, is not CGI, as I previously expected. There are some CGI touch ups to his face and eyes, to be certain, but Simon Pegg is really in that awful fat suit, sweating it out in the deserts of Abu Dhabi.

It’s clear from this feature how important is was to J.J. Abrams to create a large cast of practical creatures, giving the film a high level of authenticity. Even Warwick Davis, who made his first film appearance as an Ewok in Return of the Jedi, returned to play a creature that appears in Maz’s tavern.

Blueprint of a Battle: The Snow Fight

This is maybe my favorite feature in the collection; it’s a close call between this one and the John Williams segment, which we’ll get to momentarily. This feature deals with the film’s concluding epic lightsaber battle between Kylo Ren, Rey, and Finn.

Did you think that this scene was shot on location in a snowy forest? So did I, until I watched this. The set that was created for this scene used hundreds of real trees and a huge amount of fake snow, which helped the scene feel so real.

The Top 5 Coolest Lightsabers in the Star Wars Universe

My favorite part of the scene, however, is how the light from the red and blue lightsabers reflects off the falling snow. This feature shows how lighted prop weapons were used to achieve this effect, rather than the plain, wooden prop sabers that are used throughout the majority of the film. It truly is a gorgeous scene, deserving of its down behind-the-scenes featurette.

Perhaps the only person involved in The Force Awakens who is more legendary than Harrison Ford is the incomparable John Williams. He holds the record for most Academy Award nominations for a living person at 50 nominations, and has one five times. He has scored some of the most popular and memorable films of all time, including all other previous Star Wars films, Indiana Jones, Harry Potter, E.T., and so many more. It’s only fitting that we get an inside look at his experiences composing the music for The Force Awakens.

Williams said that he loved being able to revisit his old scores, like “The Force Theme” and Han and Leia’s theme, incorporating them into new compositions. However, “Rey’s Theme” gave him particular trouble, as he wanted to create a score that simultaneously reserved, curious, adventurous, and innocent. Not an easy task.

Williams states that he isn’t sure if he’ll be able to score anymore Star Wars films. He’s had some recent health concerns that prevented him from working on Bridge of Spies with Steven Spielberg (the first time Spielberg has made a movie without him since 1985), but for all of our sakes, I hope he can manage to do the next two films.

ILM: The Visual Magic of The Force

This short feature takes us through the work of Industrial Light and Magic, the legendary studio behind all of the film’s special effects. From CGI to massive explosions, ILM does it all, and has been an industry pioneer and leader since its creation in 1975 by none other than George Lucas. There’s not much to see here, and the practical “Crafting Creatures” feature is much more entertaining.

Finally, we get to the deleted scenes! I, like a great many people, was hoping to see an extended release of The Force Awakens and was disappointed to hear that it would not happen. Upon watching the deleted scenes, it’s pretty clear why: There really isn’t a whole lot that was left out of the film.

The deleted scenes are fairly underwhelming, as most of them are quiet, dialogue-less moments that simply add nothing to the film. I guess that’s why they were cut. The only scene of note is one where Kylo Ren searches the Millennium Falcon for Han and Chewy, coming up empty handed. But even this scene has very little dialogue, and the movie is much better off without it.

After watching all these special features, I am proud to say that I will henceforth be one of those annoying people to watch Star Wars with. “Did you know that there’s a guy in a green suit pushing BB-8 along in this scene?” “Did you know that Captain Phasma is just one of multiple female stormtroopers?” If you didn’t, be glad that you know now.